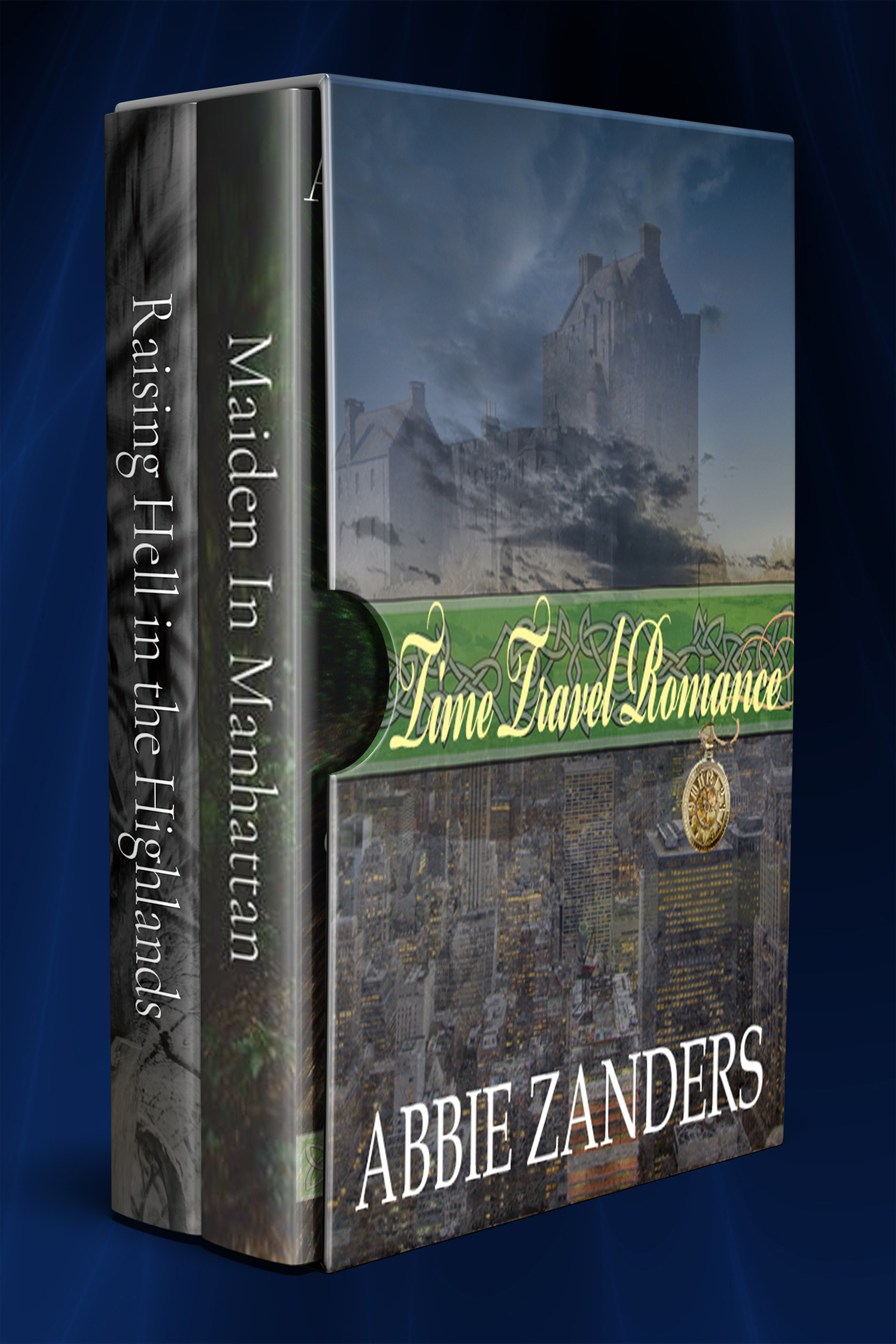 Maiden in Manhattan: When 15th century Scottish maiden Isobeille McKenna made that prayer, she never expected to find herself thrown into 21st century New York City, right in the path of a cross-town bus. Good thing EMT Nick Peterson just happened to be in the right place at the right time.

Raising Hell in the Highlands: Aislinn McKenna is a survivor, but simply surviving isn’t always enough. When she made a Christmas wish, she never expected to wake up in the middle of a clan skirmish in the Scottish highlands, nor to fall for the braw Laird Lachlan Brodie.

[From Maiden in Manhattan]

Nick was halfway through his second beer when the delivery guy appeared.  In a classic case of poor timing, Isobeille chose that moment to emerge from the bathroom.  Without turning around, Nick knew that it could not be good.  The open-mouthed gawk of the nineteen-year-old in his doorway told him as much.

Steeling himself, Nick turned and swallowed hard at the sight before him.  There was Isobeille, in vivid glory.  Her towel-damp, glorious curls cascaded down to her hips, a shade of dark red that glistened like a shiny candy apple under the lights.  The jeans he had provided were several inches too long at the bottom and too narrow at the waist, requiring that the zipper be left hanging open.  If that wasn’t bad enough, the designer T was at least two sizes too small, accentuating substantial breasts and revealing a fair part of her midsection.

He swallowed hard.  Forget the St. Paulie girl.  She looked like the quintessential poster ad for Hooters.

“Nick, I doona think I did this right,” she said simply.

He rummaged in his drawer for a minute, trying desperately to ignore the way Isobeille was feeling up the down comforter and the fluffy pillows on his bed, mumbling to himself until he extracted a pair of gray sweats and an old football practice jersey.  He placed both in her hands.

“Try these instead,” he said, wishing his voice didn’t sound like he’d just swallowed a cup of ground glass.  Then he left, closing the door firmly behind him.

Was it unusually hot in the apartment?  It sure felt hot.  Nick exhaled heavily and checked the thermostat, which displayed a completely illogical seventy-one degrees.  That was obviously not right.  Nick made a mental note to call the building super first thing in the morning and get it checked out.

In the meantime, he pulled his thermal over his head, leaving him in his plain white, short-sleeved cotton T and went back to the problem at hand. Nick managed to wrestle his hormones back under some semblance of control by the time Isobeille emerged from his bedroom.

“Does this please ye better?” she asked doubtfully.

He brought his hand up to his mouth to try to hide the smile he could not completely contain.  Tiny feet peeked out from beneath his baggy sweats, rolled up several times at the ankle.  His old jersey hung to her knees, but sufficiently covered all of those tempting curves from view.

“Infinitely,” he said, breathing a sigh of relief.  “Now let’s take a look at that hand, then we can eat.”

Nick was acutely aware of Isobeille’s gaze as he examined her hand.  As a paramedic, he was used to all sorts of reactions from the patients he treated.  Some were grateful, some were scared, some were just plain nasty.  Occasionally he would feel the heat of a woman’s stare (or less commonly, a man’s) as he tended to their injuries.  But none of them seemed to affect him quite as strongly as Isobeille’s.  It felt warm, like the sun on his skin, and sank down deep into his bones (and various other body parts).

Outwardly, he remained coolly professional.  But inside his chest, his heart pounded out a thunderous tattoo.  A viscous warmth spread from where he held her hand in his, travelled up his arm and into his chest, settling somewhere around his midsection.  This time, he didn’t bother checking the thermostat.

And it wasn’t just her tangible gaze or the blossoming warmth from holding her hand that was messing with his senses – it was her scent, too.  With each breath he took, he drew in the scent of fresh snow and wildflowers.  He had to wonder where the hell that came from, because he couldn’t think of a single product in his bathroom that smelled like that.

“Ye have a gentle touch for such a strong mon,” she said softly, bringing his ears into the sensory party.  The only thing left was taste, and he was so not going there.  “Are ye a healer?”

A healer?  “Sort of, I guess.  I’m a paramedic.”  When she didn’t seem to know what that was (and why was he not surprised?) he explained simply, “When there’s an accident or someone is hurt, my job is to assess their injuries and treat them until we can get them to a hospital.”

She smiled at him as if he had just told her he’d hung the stars in the sky.  “Ye help people.”

Nick felt his cheeks burning.  Jesus, was he blushing?  “It’s no big deal.”

He decided to drop it, focusing on coating a few of the deeper scratches with some antibiotic cream and applying some band-aids.  She seemed legitimately impressed with him, yes, and that made him feel pretty good, at least until he remembered that she’d been pretty damn impressed with a light switch and a flushing toilet, too.

[From Raising Hell in the Highlands]

Her senses were returning to her slowly but surely.  As her hearing came back online and the annoying buzz faded, her brain struggled to identify the sounds.  One was easy enough – men.  Loud, bellowing men, grunting and spewing forth colorful vulgarities in a thick brogue.

And … horses?  Not that she was particularly familiar with the beasts, but even she could recognize a few snorts and whinnies.

There was something else, too – a repeated, rhythmic clanging that resounded in her skull painfully and immediately roused her self-preservation instinct.

She rubbed at her eyes until the last of the little black dots faded away.  And then shut them again quickly in disbelief.  Clearly the blow to her head had caused significant damage, because there was no way what she had seen could be real.  She decided she must be suffering from some kind of displaced psychosis resulting from a head injury and repeated viewings of The Highlander during late night bouts of insomnia.

She pinched herself – hard – then opened her eyes again, but the surreal scene hadn’t faded.  She tried again and caught her breath.  Yep.  Still there.

The more she watched – she had quite a vivid subconscious imagination, it seemed – the more entranced she became.  Especially by the super-sized guy sporting the black and green plaid.  A warrior, for sure, with his long, flowing auburn hair braided at the temples and a symphony of rippling muscles.  With the face of an archangel – hard and masculine yet otherworldly beautiful, sinfully defined arms and legs, he moved with lethal grace and skill.

Despite his size and obvious proficiency in combat, he seemed to be a bit overwhelmed at that moment.  Aislinn counted no less than six men attacking the warrior all at once.  They, too, were large men sporting kilts, but they didn’t have the same skill with a sword – and holy shit, was that an axe? – as the really big one, and the colors of their plaids were different.

The big guy was holding his own, she noted with no little amount of respect.  But then a movement in her peripheral vision caught her attention.  As Aislinn watched in growing horror, three more men emerged from the trees behind the warrior.  With all of his focus on those in front of him and along his sides, he didn’t see the threat as she did.

It’s just a dream, she told herself, most likely the result of blunt-force head trauma.  But before she could fully process that thought, she was on her feet, shoving her personal discomfort aside and stealthily moving toward the action as her training kicked in.  It might be just a dream, but it was her dream, and she’d be damned if she’d allow such a fine warrior to go down by a sword to the back in any dream of hers.

Aislinn launched herself into the fray, pulling her blades from her boots as she did so.  In a series of lightning fast kicks and spins, she took out the three men attacking her warrior from behind before they even knew what hit them.  As the Mel Gibson look-alike turned around to see the commotion, she caught the flash of a sword sailing through the air – right at her warrior’s head.