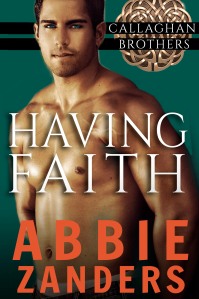 Sometimes the biggest obstacle to overcome is yourself.

Kieran Callaghan has it all. As the sole remaining single male of the Callaghan clan, he is drawing a lot of female attention. Not only is the former SEAL easy on the eyes and the poster boy for BodyWorks, the fitness center he owns/operates, but he is a genuinely nice guy with a white-knight complex.

The only thing he doesn’t have is the one thing he wants most: a croie with which to share his life.

Faith O’Connell is a young, single mom hoping for a fresh start for her and her teenage son. Life hasn’t been easy, but they’ve managed. Once forced to live off the charity of others, she is determined to make it on her own.

When Kieran shows up on her doorstep, Faith is quite sure she’s met the perfect man. He might just be the best friend she’s ever had, and her son adores him. But they come from two vastly different worlds, and Faith knows it can’t be anything more. She’s already been down that road once, and has the scars to prove it.

Kieran doesn’t care about any of that. Faith is his. And he will convince her that when you find your croie, nothing else matters.

May flowers, Mother's Day, and Special Deals on Series... Goodreads Giveaway: This month's giveaway is House Calls (Callaghan Brothers, Book 3). Five signed paperback copies of Dr. Michael's story are up for grabs. The contest runs from May 1st thru May 31st, and is open to US residents (my apologies to non-US readers). You can enter the Giveaway ...