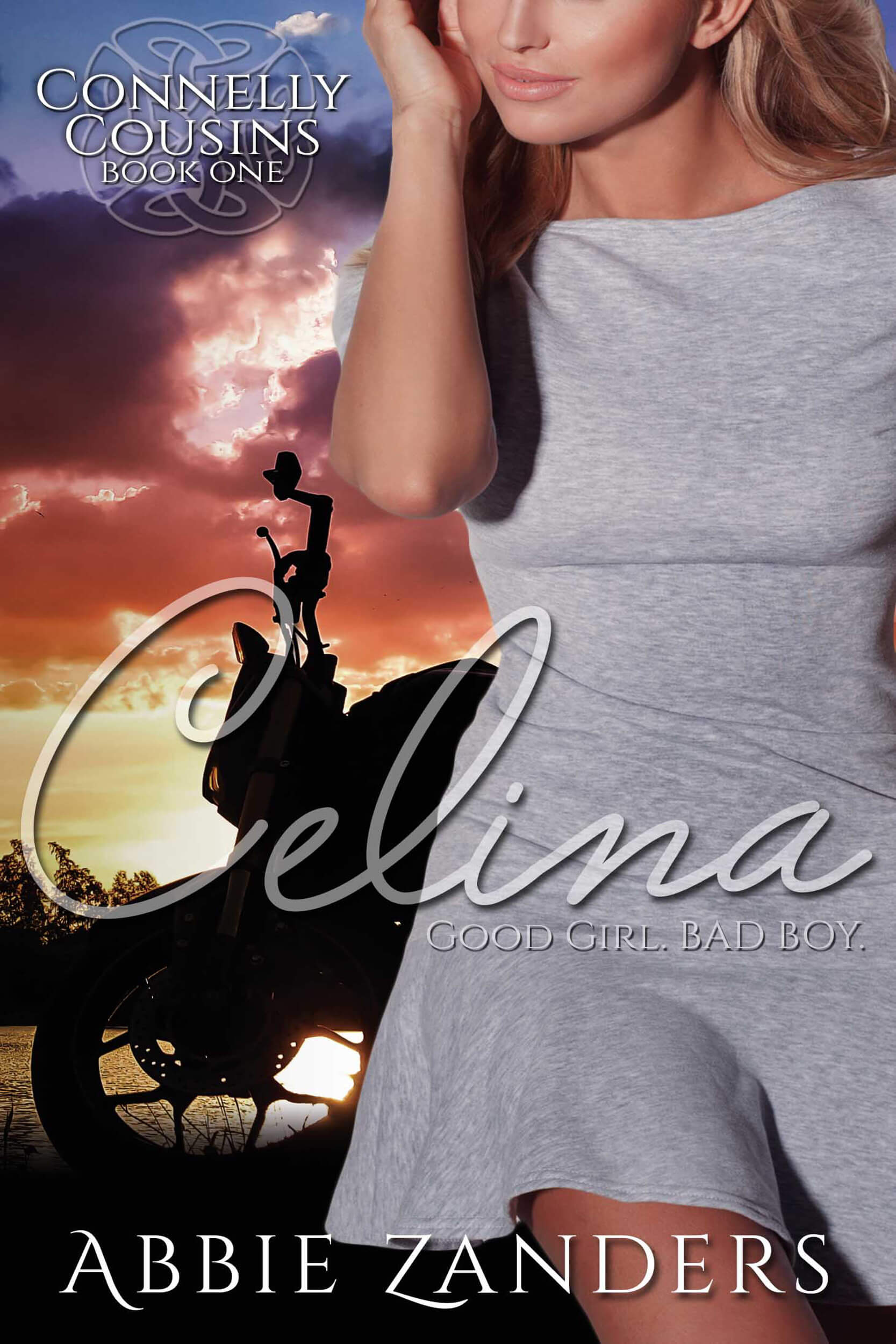 When Celina Connelly returns to Birch Falls several years after her parents’ deaths, she’s not sure she’s going to stay. Nothing has changed, and yet everything is different. Or maybe living at home with her overprotective biker brother and working in the town library just isn’t enough.

When Celina meets Jamie McCullough, she knows right away that he’s a great guy. He’s handsome, intelligent, thoughtful, and treats her well. Jamie wants more than her friendship, but Celina is saving herself for the all-inclusive, heart-pounding, breath-stealing kind of magic that comes with finding the right one.

The kind she feels when she meets Jamie’s brother, Kyle.

The dark, brooding biker is all wrong for someone like her, and yet from the moment they meet, Celina knows Kyle is the one she’d been waiting for.

Kyle McCullough is the ultimate bad boy. He likes his machines fast and his women faster. When his younger brother comes to him for advice on seduction, Kyle laughs it off, believing no woman can be as perfect as Jamie makes her out to be.

He’s wrong. Not only is Celina beautiful and sexy, she’s got the class of a lady and the soul of a biker. And the only woman he’s ever wanted to spend time with outside of the bedroom as well as in it.

But it will never work. Lina’s not only his brother’s piece, she’s also his best friend’s little sister.

Besides, she’s far too good for him. And Kyle doesn’t do good girls.

“This story pulled me in just like the Callaghan Brothers series had done. Loved it! It’s that wonderful feeling you get when you read about a couple finding their soul mate….it just makes me giddy and leaves me with [a] warm wonderful feeling.” ~ Amazon Reviewer RQB

“Love this new book in a new series! If you enjoyed the Callaghans, you will enjoy the Connelly Cousins.” ~ Amazon Reviewer Debra

The corner of Kyle’s mouth twitched. He didn’t know what was more amusing – the cute blonde chugging her beer like it was the last one on earth or the priceless look of shock on Jamie’s face as she did. He hadn’t been looking forward to playing Jamie’s personal sex counselor, but this might actually turn out to be fun.

The chick – Celina – suddenly realized they were both staring and lowered the bottle, blinking rapidly and blushing furiously. “Sorry,” she managed. “I was a little thirsty.”

Kyle knew it was impossible for anyone to see his eyes behind the heavily tinted shades, and he was thankful for that because he simply could not take his eyes off the woman sitting across from him.

Jamie hadn’t been exaggerating when he said how gorgeous she was. She was on the petite side, so he could only glimpse her from mid-chest up – and quite an abundant chest it was. She was wearing some kind of simple cotton sundress, a light pastel color that showed off her bronzed skin to perfection. A brief scan revealed no visible tan lines. Did she sunbathe topless? The thought had him shifting slightly.

His eyes raked over the parts of her he could see, mentally cataloguing her with the skill of a man who was an expert when it came to sizing up women. Her jewelry was understated. A simple gold chain, semi-choker, hung around her neck. Small gold and diamond studs in her double ear piercings, and – was that a chain dangling from one hole to the other in her right ear? Interesting. A hint of naughty, perhaps? Spiral gold thumb ring. No other adornments, though he would bet she wore a matching gold anklet beneath the table.

He was sorely tempted to drop something to check. As it turned out, he didn’t have to. A mild breeze blew her menu off the table and Kyle reached down for it. Bingo. Knotted gold anklet and matching gold strappy-heeled sandals, adorning perfectly shaped, curvy legs. Legs made expressly for wrapping around a man’s hips. Damn.

And that innocence thing? She was a real pro. Right down to the baby powder and cocoa butter scents wafting his way, with subtle overtones of a citrusy shampoo that had his pants suddenly two sizes too small. And her voice – it was soft, almost purring – a total bedroom voice. Make that three sizes.

Amazing green eyes, too. The way she flashed them at him did nothing to alleviate his burgeoning arousal. Oh yeah, she could play the proper little prude all she wanted, but he saw the fire in her eyes. Deep down, she was a hellcat; he knew that as surely as he knew his own name. Get her in bed and she’d pull a man’s soul right out through his dick, then make him sit up and beg for her to do it all over again.

When she tilted her head and started pulling on that beer again, his mind was assaulted with images of her pulling on something entirely different with that incredible mouth, swallowing something thicker and saltier than that swill she was downing.

Holy shit. He was close to coming in his jeans.

Kyle’s beer arrived. He was enjoying the show so much, he ordered another for Celina. Jamie had barely touched his, so he didn’t bother. Kyle wondered what she would be like after the second beer. Would she start to loosen up a little? Or would she maintain her quiet, shy girl act?

The server disrupted his train of thought. “Are you ready to order?”

Yes, kitten, thought Kyle. What are you hungry for this evening? Gonna play dainty and get a little salad with a light vinaigrette on the side, perhaps?

The men deferred to Celina, allowing her to order first. “I’m starving,” she said, looking at the plastic-coated menu before her. Her tongue peeked out absently, running slowly along her top lip while she perused the choices. Kyle shifted quietly across the table.

“Um, let’s see. Can I have the meatball parm, heavy on the parm, and, um, maybe something gooey and deep-fried in the meantime?” This time Kyle could not completely contain the grin that tugged at the corners of his lips. Jamie didn’t seem at all fazed by her order, and said that sounded good to him. Kyle kept it simple by saying “Just make it three.”

Jamie did most of the talking, which was all right with him. It gave him a better opportunity to study the mystery before him. He had to hand it to her – she was good. The light, musical laughter that tickled him somewhere deep in his gut, the natural way those golden curls fell when she tilted her head to look at whoever was speaking. And when she did, she seemed really interested, not just listening politely.

No wonder Jamie liked her. She could listen to him drone on incessantly yet gave the impression that she thought he was the most fascinating man on earth. He himself hadn’t heard a word Jamie said all night.

Another bonus – she was one of the few women who actually had longer hair than him, though maybe those were extensions. After all, that couldn’t possibly be her natural hair color, could it? All of those shades, combining together into silky waves with the hues of precious metals. The question made him want to find out in the worst way, though she’d probably notice if he crawled under the table and relieved her of her panties to check…

“I’m not wearing any,” she said, laughing. Kyle jerked from his musings and choked on his beer. Before he could pull away, she was leaning over the table, treating him to a close-up view of her well-endowed chest. She didn’t smack his back, like most people would, but rubbed it. Sweet Jesus, her hands were making his skin burn. How was that even possible? He was still wearing his leather jacket, though it was getting damn hot.

“What?!?” he managed to ask when the choking subsided.

“I asked what perfume she had on this evening, and she said she wasn’t wearing any,” Jamie explained, looking at him oddly.

Celina resumed her place next to his brother, taking those full hips and tiny waist out of his immediate line of sight. Hell, she could have been the model for the original hourglass. Not super slim and streamlined like so many women these days. Why anyone thought that was attractive he’d never know. Celina was pure woman with all those soft curves that had his hands itching to cup and knead and squeeze, and his cock stiff and aching, knowing she would be sweet and soft and yielding beneath him.

Oh, man. He hadn’t been this hard for a woman since he first became aware of exactly what that particular piece of anatomy could be used for. Over the years, he’d had lots of women begging for the pleasure he could provide, but this time he was the one in danger of begging.

Kyle gave himself a mental shake and forced himself to get a grip. This was Jamie’s girl, and he was only here to observe and offer advice. His role was to decipher her subtle tells and provide his brother with a no-fail plan for getting a piece.

She was a challenge, he’d give her that. Not many women could pull off that combination of sweet, sexy, innocent, and hot so seamlessly. Even he might have had to put a bit of effort into seducing this one, though the thought shouldn’t have been as appealing as it was.

It didn’t help that she kept sneaking glances his way, either. This time, Celina was looking at him as though she was trying to figure out what he had thought she said. He knew the second the plausible explanation came to her, because her eyes widened and she blushed furiously.

Thankfully, their food arrived and provided a much-needed distraction. Kyle was finding it hard to swallow past the constriction in his throat. It only got worse when he saw her two-hand the long sandwich, her tongue licking the sauce that dripped along the meatballs on the end. Her eyes closed in ecstasy as she rolled the first bite around in her mouth and moaned appreciatively. Oblivious to everything else around her, she handled that sub with total focus and intent. He glanced at his brother. Jamie was happily tucking into his own meal, completely ignorant of the X-rated sideshow going on right next to him. No wonder he couldn’t get himself laid.

“Is everything alright?” Celina asked when she’d taken several bites from her sub and he had barely managed one.

“Not hungry,” Kyle rasped, pushing the plate away. Jamie was looking at him strangely again, well aware that under normal circumstances, Kyle had the appetite of a linebacker. Celina was watching him again too, but her eyes were … curious. She reminded him of a little girl peeking through the bars at the lions pacing around their cages at the zoo, one without enough sense to be afraid.