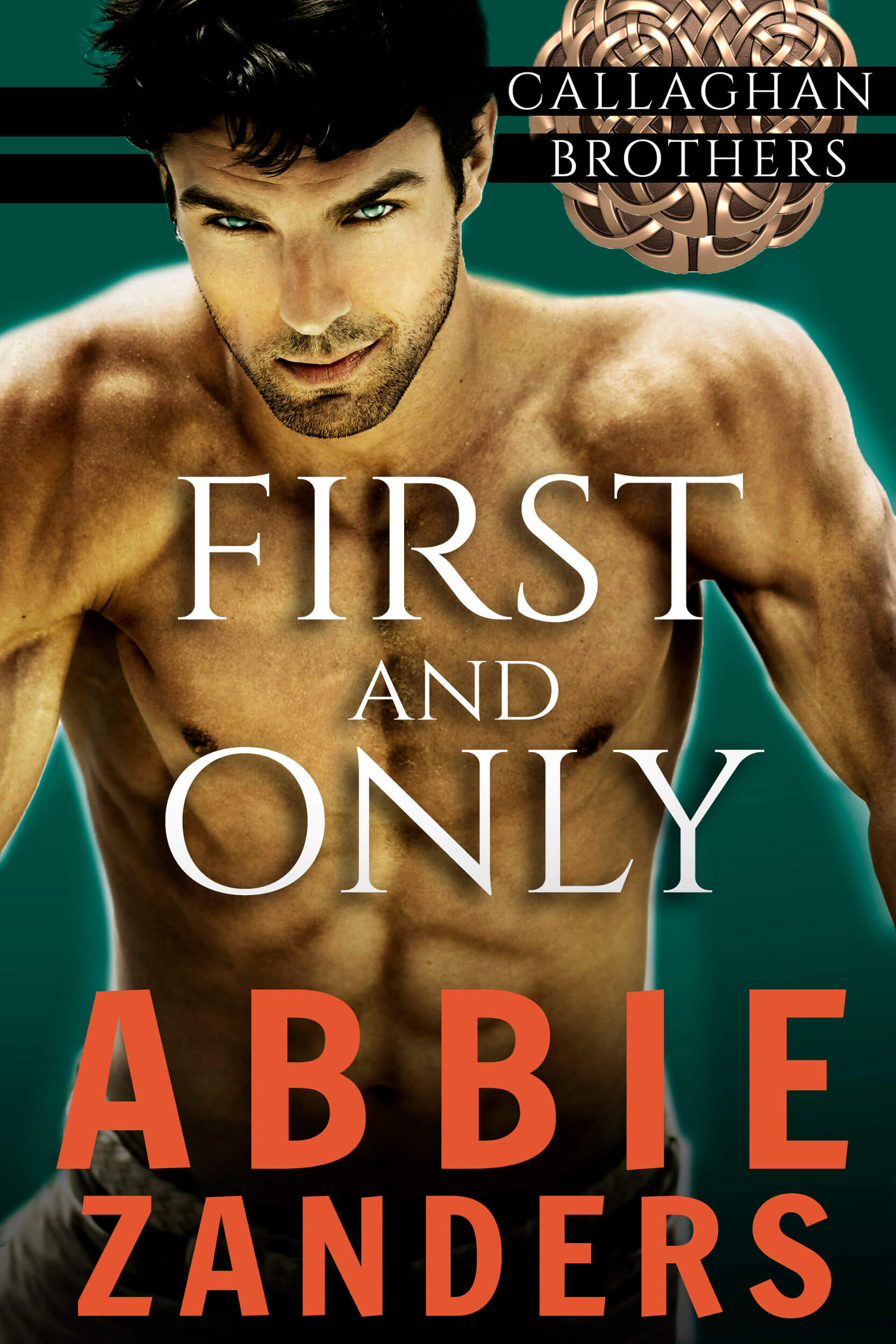 You never forget your first love.

Lexi O’Connell has secretly been in love with Ian Callaghan for more than ten years. So when he turns those sexy crystal blue eyes her way, she doesn’t have a hope of resisting, even if she knows it is only for one night.

Even if it will break her heart. Because while she would know him anywhere, he doesn’t even recognize her.

Ian Callaghan is mischievous, playful, and irresistible to women. When he sets his sights on the attractive young woman who has been staring at him, he doesn’t think twice about seducing her.

It wasn’t supposed to be more than one night. And falling in love with her was definitely not part of the plan.

A few days is all Ian needs to know that Lexi is The One. His croie. His soul mate. And he doesn’t understand how she can just walk away.

But what Ian doesn’t understand might just kill her.

““This second book kept me turning pages to see what was going to happen next. I love Ian’s character and Lexi is a great addition to the Callaghan clan.” ~ Amazon Reviewer P. S.

“This book rocked. So many emotions and you can truly feel the love of this family.” ~ Amazon Reviewer T. M.

Lexi started at the deep male voice near her ear. The gorgeous man from a few seats ahead was indicating the window seat next to her with a graceful wave of his large hand. She scanned the half-empty bus. Surely there were lots of other seats available. Watching from afar was one thing, but sitting next to him? Talking to him? That was something else entirely.

She was just about to suggest another location when their eyes met. The words she was about to utter froze upon her lips. Stunned shock raced through her as every bodily system went into sudden and total lockdown.

This man didn’t just look like Ian Callaghan. He was Ian Callaghan, the man she had secretly loved and lusted over for the better part of her adult life. Even after ten years, she would recognize those perfect, crystal blue eyes and devastating, mischievous smile anywhere.

He offered her an apologetic smile. “Please,” he said, his voice rumbling through her chest and settling somewhere between her thighs. “Have pity on me.”

Somehow her heart resumed beating, and her mind began functioning again, though it was admittedly running at minimum capacity while the rest of her tried to process the man before her. Speech and coherent thought were not attainable quite yet, so minimal movements were about all she could manage.

Lexi’s eyes flicked toward the seat he had previously occupied. The blonde cougar was gone. In answer to her unspoken question, he glanced toward the bathroom. Ah, thought Lexi with equal parts horror and amusement. He saw his chance at escape and was going for it.

Without a word Lexi lifted her pack and prepared to scoot over, but Ian apparently had other ideas.

“I’ll take the window, if you don’t mind,” he said quietly. She cast a doubtful look at his long, muscular legs. The well-worn denim clung to them, leaving little to the imagination and doing absolutely nothing but encouraging the ridiculous fantasies spawning uncontrollably in her mind. Fantasies that were all too familiar.

He grinned what had to be the sexiest half smile she had ever seen. Honestly, she thought, regaining a little more of her ability to think, that thing should be illegal for the all the effect it was having on her, and, she’d bet, every other post-pubescent female he had ever used it on.

“Don’t worry,” he whispered in a tone way too seductive for the back half of a bus. “I have a talent for fitting into tight spaces quite well.” He added a wink for emphasis, and Lexi felt a rush of warm, wet heat between her legs. Yep, definitely illegal.

Without waiting for her to answer – which was good because she would have sounded like a babbling idiot had she even tried to speak – he placed both his bag and hers in the overhead compartment – dear Lord, every muscle in his chest and arms rippled right before her very eyes – and slid in beside her. She tried not to think of the lush package sliding by in front of her face – her eyes, her mouth, her tongue – and failed miserably. This man was her every sexual fantasy come to life, up close and personal.

Lexi tried to swallow, but ended up closing her eyes in humiliation when her throat refused to cooperate and she gulped audibly. She could have sworn she heard a small chuckle, but it was hard to hear much of anything over the blood violently pulsing in and around her ears.

He had only just gotten himself settled when the blonde emerged from the tiny bathroom space and proceeded up the aisle, freshly perfumed and sending Lexi into an immediate sneezing fit. The woman turned back to shoot her an irritated glance and noticed Ian now sitting next to her. Her glance quickly turned to a scowl.

Lexi chanced a peek over at Ian, who was now slouched down slightly in his new seat, arms crossed over his sizable chest, and ball cap pulled down over his eyes. Turning back to the woman, she offered a little smile and shrugged apologetically, but all she received was a whole lot of nasty through narrowed eyes, tightened lips, and a look that gave Lexi goosebumps.

“Is she gone?” he murmured so that only Lexi could hear.

“Yes,” she whispered back out of the side of her mouth. “But I think she wants to kill me.”

“I’ll protect you,” he chuckled in a low, soft rumble that reminded Lexi of a tiger’s purr and set scores of butterflies alight in her core. He shifted a little so his broad shoulders touched hers, inclining his head toward her. He inhaled deeply, a smile curving those sinfully wicked lips. “Ahhh. Infinitely better. Thanks.”

A few minutes later, the steady rise and fall of his arms across his chest suggested that he had fallen asleep. Lexi finally started breathing normally again. For as long as she could remember, Ian Callaghan had had that effect on her. Apparently ten years and twelve hundred miles had done little to dampen it.

She took the rare opportunity to study him discreetly. If she did it right, she figured, she could use what she saw as fuel for several weeks’ worth of late-night fantasies at least. Because that’s all they would ever be: fantasies. He was harder looking than she remembered. Darker. Leaner. More muscled. More of a man, less of the boy he had once been, though there was still a roguish playfulness about him that she was sure had convinced a lot of girls to play naughty over the years. Lexi had always been one of the good girls, but the funny thing was, something about being so close to him made her want to be naughty, too.

She was able to discern the bottom of a tattoo extending just beyond his short sleeve. Of course. The Callaghan crest. She remembered Kieran going on and on about it, how he couldn’t wait until he was eighteen so he could get one, too. Each of the Callaghan brothers sported the ink, customized with a design that symbolized their particular skill. Kieran wanted a dragon, something to indicate his passion with martial arts. She wondered what Ian’s was. He’d always been super good with electronics, if she remembered correctly.

He smelled better than she remembered, too, and that was a bad thing, because even back then there was something about him – whether it was the soap he used, or the deodorant, or just his God-given natural scent – that seemed to throw females into instant heat. Dear God, he smelled so good she wanted to bury her head in his neck and lick him right then and there to see if he tasted just as fine. She sighed, a sound of secret suffering with which she was intimately familiar.

Ian neither recognized nor remembered her; that much was obvious. She wasn’t sure if she should be flattered or insulted. Flattered, because she had really blossomed since the last time they had seen each other. Insulted, because, well, she would know him anywhere.

But then, she already knew Ian had never been interested in her. Even if she hadn’t been a couple of years younger than him, she had never really been his type. On the plain side of being considered pretty, she was quiet and shy. The type of girl no one noticed unless she did something to put herself on the radar. And despite her instant and undeniable attraction to Ian Callaghan, she hadn’t been willing to do what so many of the other girls were for a stolen night with the bad boy of the bunch. No, Lexi had always wanted to save herself for the right man.

She almost snorted. As if there was such a thing.

Oh, well. The past was the past, and none of it really mattered. Soon enough they would go their separate ways and she would probably never see him again anyway. It was for the best.