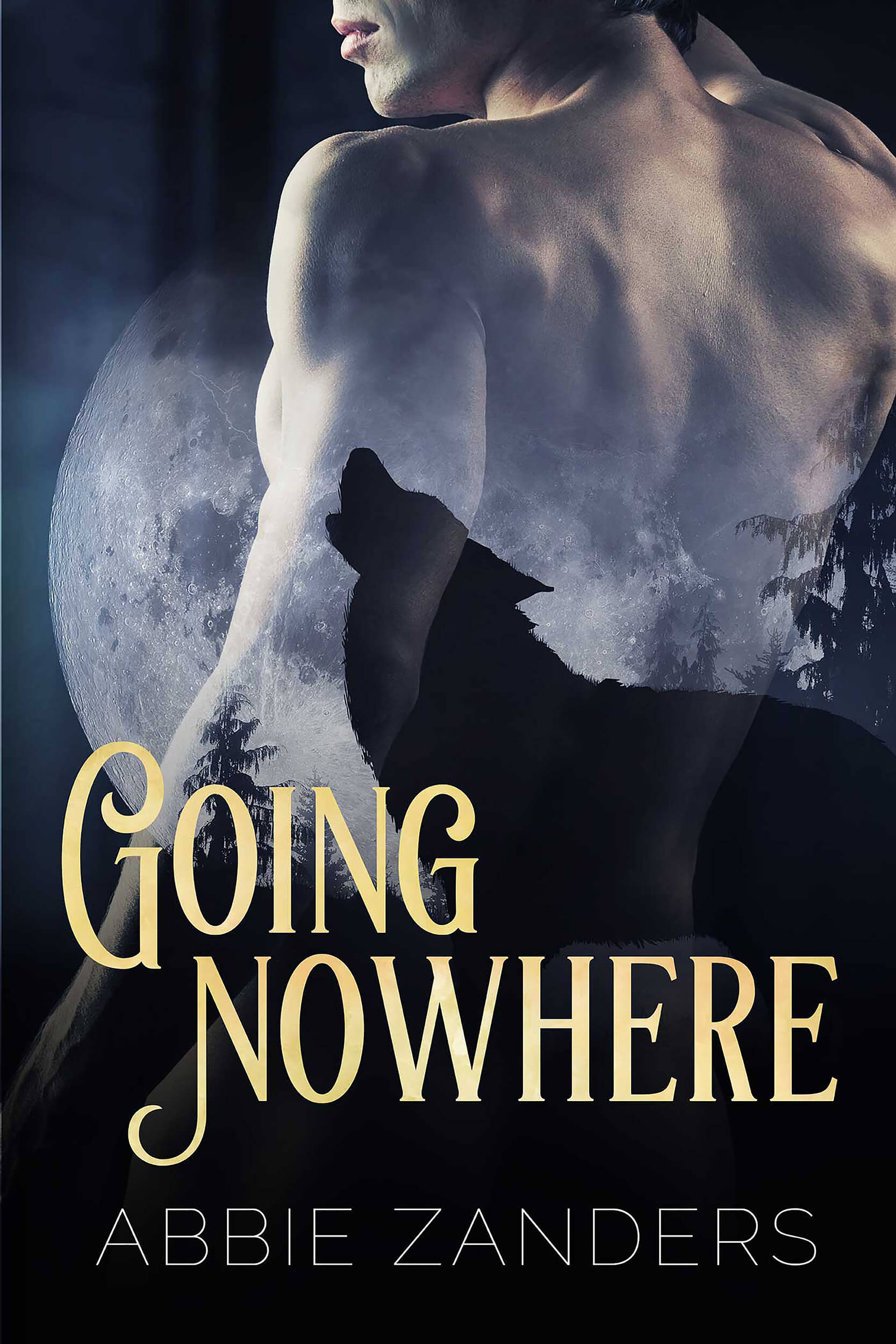 Reid MacIntyre refuses to let the wolf within him call the shots. He has no intentions of falling prey to the beautiful and tempting woman with the amber eyes, even if his wolf insists she’s their mate. As a member of an elite, underground special ops team, he can’t afford any weakness, especially with a vicious enemy targeting shifters.

Alyx Laskarius is trying to stay one step ahead of the man who wants her for all the wrong reasons. To protect herself, her family, and her secrets, she can’t trust anyone — especially not the dark and sexy mysterious neighbor who seems to have quite a few secrets of his own.

What readers are saying about Going Nowhere…

“ The well-defined plot snags you from the first page and keeps you interested until the very end. Oh, and the sexy times… HAF.” – Amazon Review Kasey

A sudden knocking interrupted our conversation and drew our attention to the kitchen door. If the looming silhouette in the window didn’t give it away, the sudden, tingly awareness skating along my skin did. Green Eyes.

Gram got up and opened the door before I had a chance to beat a hasty retreat. I settled for clearing the table and standing at the sink with my back to him, directing all of my attention to the serious business of rinsing the breakfast dishes.

Or at least, I tried to. His presence wrapped around me like a warm blanket, making it impossible to ignore him completely. It kind of pissed me off. There were enough things in my life that I had little or no control over. My body (generally) wasn’t one of them.

Gram, of course, invited him in and suggested that I pour him a cup of coffee. I took a deep breath and reminded myself that I really did love my grandmother and matchmaking was in her DNA.

“Thanks, Mrs. Quirke,” Green Eyes said in that low, delicious voice, “but I can’t stay. I just stopped by because they’re calling for a Nor’easter in a day or two, and I wondered if there was anything I could pick up for you in the way of supplies while I’m in town.”

“How kind of you,” Gram said with genuine affection. Apparently, Green Eyes’ popularity with women transcended generations, though I was pretty sure Gram was affected differently than I was. At least I hoped so, because … yeah, awkward.

I closed my eyes and held my breath as I waited for what I knew was coming next, counting down silently in my mind. Three, two, one …

“Now that you mention it, I could use a few things,” she said.

I withheld my snort. Real subtle, Gram. With the stockpile of dried and homemade canned goods in the pantry, the woman was prepared to ride out the apocalypse. Then she turned her traitorous eyes my way, a silent challenge. “Why don’t you ride in with Reid, dear? That is, if he doesn’t mind.”

It took Green Eyes a moment to answer. Clearly, he was not aware of my grandmother’s predilection toward matchmaking. I almost felt sorry for him. He had no idea what he was up against.

My core clenched without permission. It was the ma’am that did it, spoken in that sexy rumble. On top of everything else, the guy had to be polite and respectful, too? Why couldn’t he be a jerk? It would be so much easier to write him off if I could find just one undesirable thing about him.

“I’m sure Mr. MacIntyre has his own things to do, Gram.”

“Reid,” he corrected in that deliciously velvet voice of his. “It’s no trouble, and I’d appreciate the company.”

Double-damn. I could not catch a freaking break.

Delighted by the corner she’d now backed me into, Gram twittered, “You two haven’t been properly introduced, have you? Reid, this is my granddaughter, Alyx Laskaris. Alyx, turn around dear, don’t be shy. Alyx, this is Reid MacIntyre.”

Reid extended his hand. I didn’t want to take it, but short of being exceptionally rude, I saw no other option. His hand was big and strong, and so warm. The contact sent tingles through my entire body, just as it had yesterday, except yesterday I’d been wearing gloves. Skin to skin contact was far more potent. Some of those earlier tingles of awareness I’d been feeling rocketed into full-on electrical shocks centered primarily in my girly parts.

I couldn’t help myself. I looked, and damn. They were even greener than they were yesterday. Clearer. More intense. Hungry. I felt the heated flush that started down below rising into my neck.

I yanked my hand away, earning myself a slightly lifted brow. I could have sworn his nostrils flared, too.

Gram, of course, was thrilled with the exchange. “Excellent! Let me just give you a list…”

Fifteen minutes later, we were driving in silence toward the center of town. I positioned myself as far away from him as physically possible, plastering myself against the passenger door. It didn’t do much good. His scent, fresh and dark, filled the small space, capturing my senses, intoxicating me.

He, on the other hand, didn’t seem to be affected by me at all. Since leaving Gram’s, he hadn’t spared me a single glance.

I relaxed slightly. Maybe this weird vibe was just on my end. Other than a phoned apology and a perfectly platonic handshake, Reid hadn’t shown any signs of interest. Well, there was that panty-melting look in his eyes back in Gram’s kitchen, but that might have been an optical illusion caused by the hormonal uprising his presence incited.

The more I thought about it, the more sense it made. Gram had put him on the spot, and just like my good manners demanded I accept the hand he’d offered, his good manners wouldn’t allow him to be rude. With that body, an aura of danger, and those incredible eyes, he didn’t need any help in obtaining female companionship any time he wanted.

Of course, Gram would argue that ‘any woman’ wasn’t the same as ‘the right woman’, and I’d have to agree. Before the whole mess with Roger, I’d gone on my fair share of dates. Nearly all of them had been positive experiences. But never once had I thought I’d found Mr. Right. In fact, I’d never found anyone that I’d had the same instant, powerful attraction to as Green Eyes.

I shut those thoughts down pronto. They weren’t helpful, and if I had any hope of getting through the next couple of hours without making a huge fool of myself, I had to get a grip.

The town proper wasn’t very big, no more than a couple of blocks in any direction. This was where all of the businesses were, conveniently located to provide whatever goods and services the locals might need.

Reid pulled into one of the few open diagonal spots in front of the hardware store. “I can pick up the ice melt Grace wanted if you want to get started on the grocery list.”

I looked down the street, frowning when I saw the mass of cars in the parking lot of Flannery’s Fine Foods. “Why is that everyone gets a craving for French toast whenever a storm approaches?” I muttered aloud.

His lips quirked, sending my heart into flutters. I really wished he wouldn’t do that. They were some fine male lips.

“Can I pick anything up for you?” I asked, looking back down the street.

“This shouldn’t take me long. How about I just meet you in there?”

“All right,” I shrugged and turned to go.

The store was packed with panicking people. Did they really not have enough food to last a day or two? Now the toilet paper, I understood, but who needed six half-gallons of ice cream to weather out a storm?

I hadn’t made it halfway through the store before Reid appeared, his arms filled with wrapped packages from the meat department. “May I?” he asked, tilting his head toward the few meager selections in my cart: butter, milk, eggs, and some organic produce that would make a fine stew.

He dumped his selections then took off again, returning multiple times with his arms full. By the time we reached the checkout, the cart was close to overflowing. “Expecting company?” I asked.

“That’s a lot of food for one person.”

I wasn’t touching that one with a ten-foot pole.

The trip home was just as quiet as the one into town. Reid insisted on helping me carry my meager purchases into Gram’s house. I admit, I didn’t have as much of a problem with his chivalry as I might have had earlier, now that I was convinced he had no interest in me whatsoever. Then he thanked me for the pleasure of my company (his words) and left without another word.

Despite the need to keep my rampant hormones on a tight leash, the afternoon had been a pleasant surprise. No inane conversation. No intrusive questions. No lines of bullshit or crass innuendos. Reid had been a perfect gentleman — opening doors, carrying bags, even reaching for items on the higher shelves for me.

If I had any complaint at all, it would be that he did seem to attract a lot of female attention. No matter where we went, he drew the appreciative stares of women, some of whom turned their eyes to me, their lust tinged with either envy or malice (sometimes both). I could understand it, even empathize, but that didn’t mean I had to like it. I told myself (firmly) that it was simply irritation and not the possessive jealousy that it felt like, because that would be just ridiculous. Reid wasn’t mine, and I didn’t want him.

I did appreciate, however, that Reid didn’t seem to notice them at all.