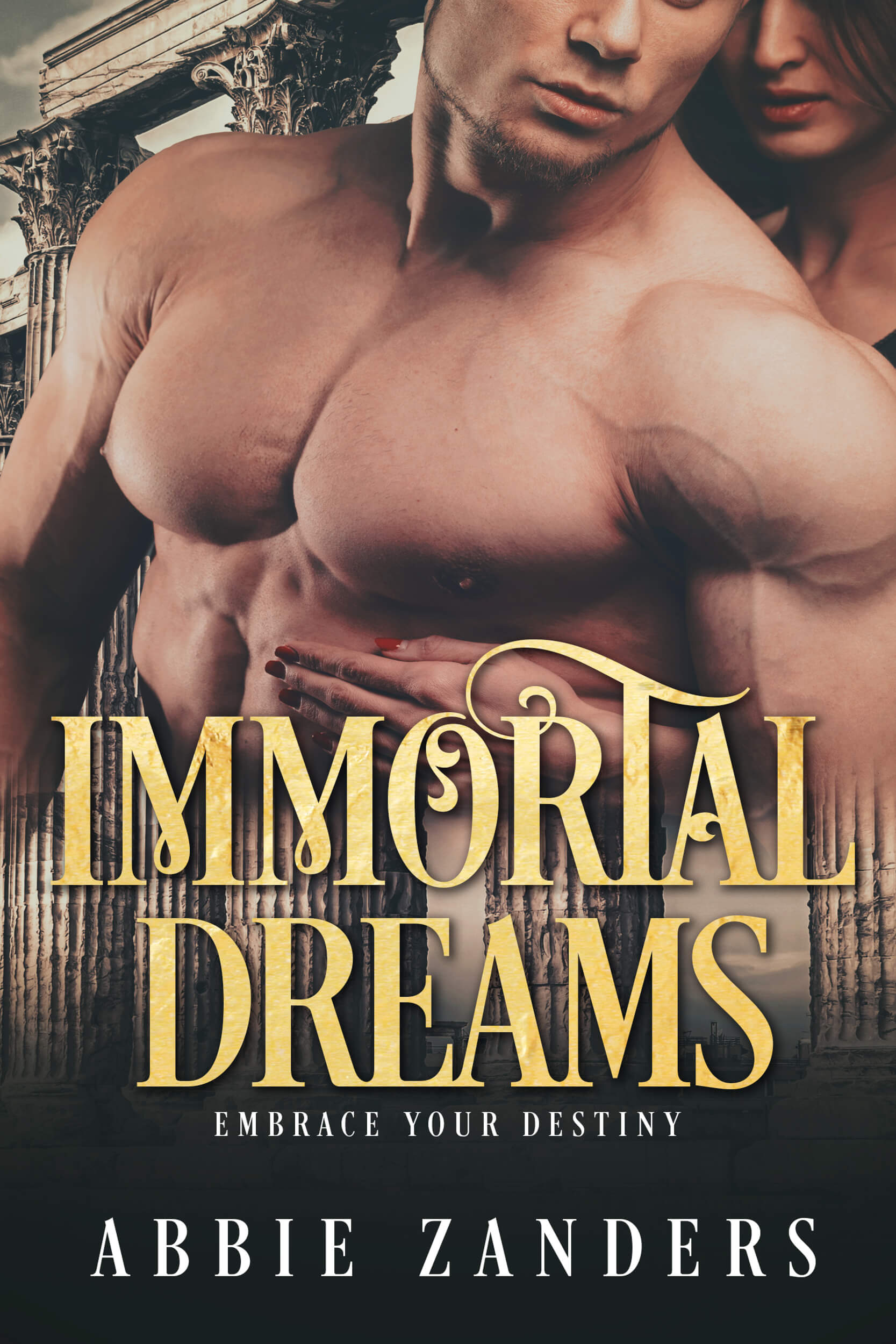 The gods of Olympus aren’t gone. They’re just more discreet than they used to be.

On the outside, there is nothing remarkable about Ellie Cavannaugh. Of average height, average looks, she is sensible and wholly competent.

But inside, she has the soul of a goddess.

Nik Deimos is a god. The son of Ares and Aphrodite, his duplicitous nature often has mortals cowering in fear or writhing in lust. Except for his personal assistant, that is.

She seems wholly unaffected. It intrigues him. The more he learns about Ellie, the more he is convinced she was meant to be his.

There is only one problem: Ellie has already bound herself to another.

“While the book has a solid grounding in classic mythology, the story arc is definitely its own…” – Amazon Reviewer EK

“Greek mythology told in a modern romance … so much fun to read!” – Amazon Reviewer Debra

“Ms. Zanders’ writing enchants me… Immortal Dreams is a sweet and engaging romance I completely immersed myself in.” – Amazon Reviewer Penny

Nikolaos’s eyes flicked to the screen and narrowed. His voice became a scathing hiss. “My presentation is in less than thirty minutes. Cutting it a bit close, don’t you think?”

Her only reaction was to blink. Slowly.

She did that occasionally. It fascinated him to no end, wondering what was going on behind those muddy brown eyes. He could sense something there. Feel it, like the increased electrical charge that accompanied a gathering storm, although her expression gave the impression of a perfectly calm, cloudless sky.

“Today’s presentation is on your tablet, sir. All the materials have already been delivered to the conference room. I have arranged for coffee and a continental breakfast to arrive precisely fifteen minutes before the scheduled start of the meeting.” Her voice was soft, but not weak, with not a single trace of sarcasm or resentment.

His eyes flicked to the screen again. “Then what is that?”

“Next week’s presentation for the board, sir.”

He glared at her for a long minute, seeking the source of that intangible, humming presence. She held his gaze, one of the few who could; at least without trembling, sweating, or being reduced to tears.

Well played, Ms. Cavanaugh, he thought, though he would never say so. He had a feeling it would insult her. Instead, he opted for tilting her perfectly balanced axis, simply because he could.

Another blink. Only the mildest hint of surprise.

Ellie was his ghost, his “woman behind the curtain” that magically made everything happen. Her job was to make all the arrangements, set everything up, and then disappear quietly into the shadows, leaving him to look singularly brilliant and capable. She excelled at it, while reveling in the anonymity of it. This woman wanted to be invisible, he realized. It was the why of it he didn’t know.

Her skills far surpassed those of any personal assistant he had ever had. Why wouldn’t she want everyone to know that? Wasn’t it basic human nature to be self-serving?

“In what capacity, sir?” she asked in that soft, completely professional way of hers.

His brief flash of triumph for eliciting some reaction—an ever-increasing challenge over the past several months—fizzled. He hadn’t foreseen her asking that. She rarely questioned him, always seeming to know exactly what he wanted, and usually before he knew himself. That happened so often, in fact, that he wondered if she might have a bit of Oracle in her ancestry. He had asked one of his cousins once, but he couldn’t make heads or tails of the riddle-like response.

Nik couldn’t tell her the truth, that over the past couple weeks he had become somewhat fascinated by her quiet strength and unflappability. Nor could he admit that this morning’s presentation was destined to be interminably dull and he wanted her around so he would have something interesting to think about while pretending to care about sales on the East Coast or marketing strategies.

“Someone needs to make my coffee,” he snapped, wincing inwardly when it came out sounding harsher than he intended.

As usual, she took the jab with perfect grace and serenity. The oddest thing? She made it seem as though making him a good cup of coffee was every bit as important as nailing the multi-media presentation she had spent the last few weeks perfecting.

His inability to ruffle her intrigued him. Usually, all he had to do was look at a woman and she would be ready and willing, suffused with lust and desire. Or, if he wasn’t feeling particularly amorous, he could adjust his glare and have her running for the door in sudden panic and fear. Both skills were the result of his unusual heritage.

That was what happened when you were the child of Aphrodrite, goddess of love, and Ares, the god of war. You could just as easily go either way with equal aplomb.

Beneath the wholly unattractive reading glasses she tended to wear when working at the computer, her brown eyes remained cool and unaffected. They did not shrink in fear, nor did they expand in lust. They just stared back at him. Patient. Capable. Waiting.

He narrowed his eyes again. No mortal female should be able to control her eyes that completely, he realized with a start.

He sharpened his vision and looked more closely, the answer becoming clear a second or two later.

Contact lenses! But why would she wear contact lenses if she insisted on wearing those gods-awful spectacles every day? She couldn’t possibly be nearsighted and farsighted at the same time, could she? He never did quite understand these human shortcomings.

“Sir?” she prompted, and he belatedly realized she had asked him something and was awaiting his response. Unfortunately, as lost as he had been in her eyes, he had no idea what it was.

Annoyed at being caught, he barked, “You figure it out, Ms. Cavanaugh. That is what I pay you for, isn’t it?”

When a spark of something flashed momentarily behind the dark brown of those lenses, he felt like doing a fist pump. That was two almost reactions in the span of a few minutes. Clearly, he was getting better at reaching the part of her she kept so adroitly hidden away.

Once again, however, his triumph was short-lived when he saw the barest ghost of a smile playing about her lips and a shiver of foreboding ghosted down his spine.