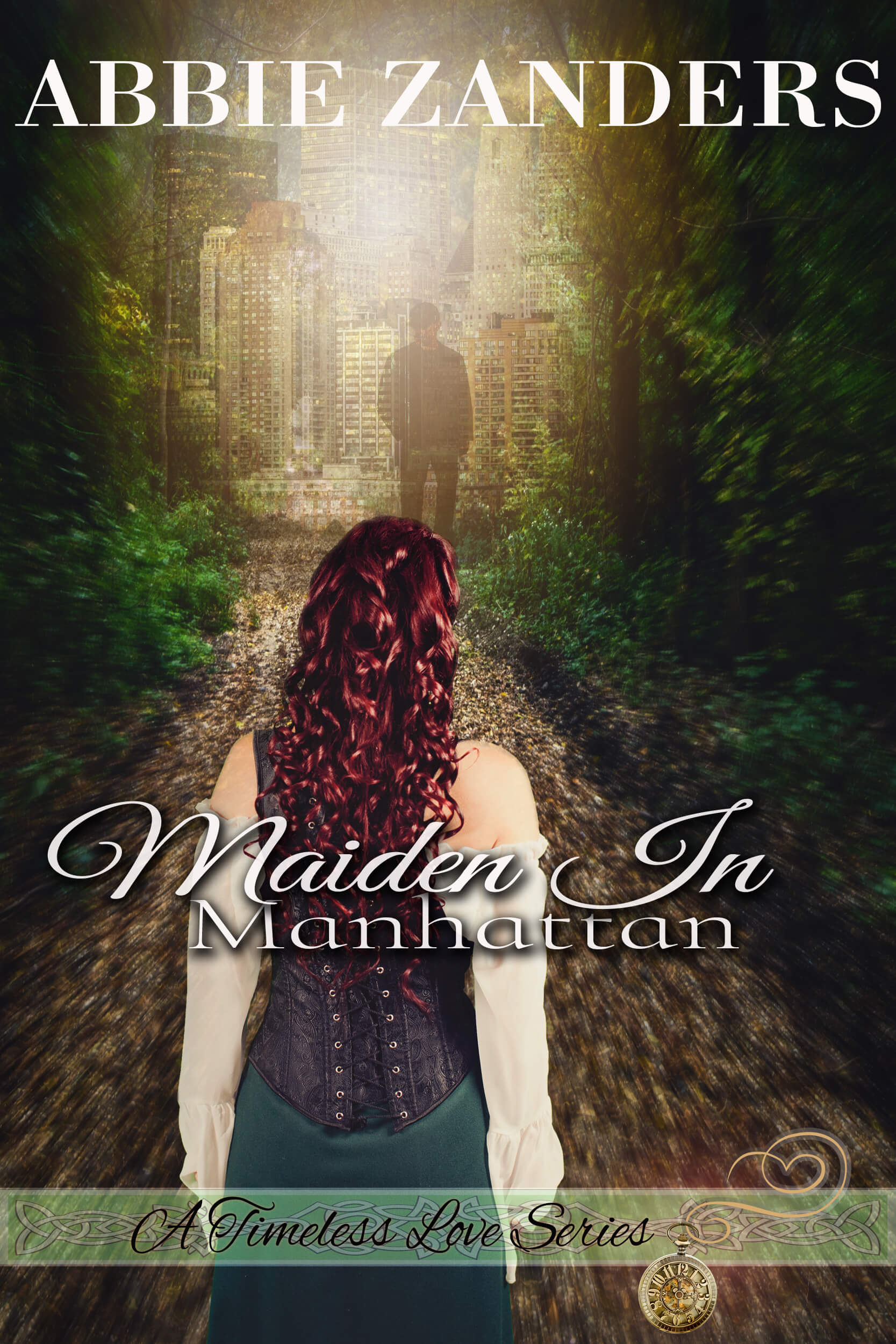 How far would you go to find your soul mate?

Little did Scottish peasant girl Isobeille Aislinn McKenna know that when she prayed for divine intervention in 1414, her desperate plea would be answered by throwing her six hundred years into the future – right into the path of a bus in the heart of one of the busiest cities on the East Coast.

Thankfully, Nick Peterson was there to tackle her out of its path. He’s not happy about it, but both his conscience and his protective instincts kick in in a big way when he realizes Isobeille has nowhere else to go.

But how is he going to explain her to his girlfriend?

“Time travel romances are hard to find and this one is a gem.” ~ Amazon Reviewer O.

“What a wonderful and light story! It made the perfect morning escape.” ~ Amazon Reviewer T. O.

Nick was halfway through his second beer when the delivery guy appeared.  In a classic case of poor timing, Isobeille chose that moment to emerge from the bathroom.  Without turning around, Nick knew that it could not be good.  The open-mouthed gawk of the nineteen-year-old in his doorway told him as much.

Steeling himself, Nick turned and swallowed hard at the sight before him.  There was Isobeille, in vivid glory.  Her towel-damp, glorious curls cascaded down to her hips, a shade of dark red that glistened like a shiny candy apple under the lights.  The jeans he had provided were several inches too long at the bottom and too narrow at the waist, requiring that the zipper be left hanging open.  If that wasn’t bad enough, the designer T was at least two sizes too small, accentuating substantial breasts and revealing a fair part of her midsection.

He swallowed hard.  Forget the St. Paulie girl.  She looked like the quintessential poster ad for Hooters.

“Nick, I doona think I did this right,” she said simply.

“Fuck me,” the delivery boy murmured, and Nick was forced to agree with his assessment.  In her costume dress, she had been sexy.  In tight jeans and T-shirt, she was nothing short of drool-worthy.

He rummaged in his drawer for a minute, trying desperately to ignore the way Isobeille was feeling up the down comforter and the fluffy pillows on his bed, mumbling to himself until he extracted a pair of gray sweats and an old football practice jersey.  He placed both in her hands.

“Try these instead,” he said, wishing his voice didn’t sound like he’d just swallowed a cup of ground glass.  Then he left, closing the door firmly behind him.

He would not think of how much bigger her breasts were than Gloria’s, nor the contours of her perfect heart-shaped ass.  He would not think of how good she smelled, or how soft and utterly lickable her creamy skin looked.  And he would not, under any circumstances, consider the kinds of sounds she might make as he buried himself repeatedly in her lush little body or screamed out his name in that thick brogue of hers.

He had a girlfriend, goddammit.  A girlfriend who he would be with right now had he not been running late.  If he had picked Gloria up on time, she never would have been in her little cubicle when the editor came by with an extra assignment, and he wouldn’t be pacing back and forth in his tiny living room sporting the hard-on from hell.

Was it unusually hot in the apartment?  It sure felt hot.  Nick exhaled heavily and checked the thermostat, which displayed a completely illogical seventy-one degrees.  That was obviously not right.  Nick made a mental note to call the building super first thing in the morning and get it checked out.

In the meantime, he pulled his thermal over his head, leaving him in his plain white, short-sleeved cotton T and went back to the problem at hand.

What was he thinking about again?  Oh, right.  Gloria.

At least she hadn’t sounded too pissed that he’d blown their date.  Nick wasn’t quite sure what that meant, exactly.  Maybe Gloria was glad for the opportunity to get a little extra credit.  Her job and her career were very important to her; she was always trying to suck up (though she preferred to call it ‘capitalizing on an opportunity to advance her career’).

Or maybe Gloria was glad for the chance to put things off between them for a little while longer.  Hadn’t she told him that she wanted to keep things from getting too complicated too quickly?  That she needed ‘space’ and ‘time’ to ‘discover who she was’ before she could even think about committing to something more than the occasional, albeit exclusive, hook-up?

He would have to wait and see; the answers weren’t going to magically come to him tonight, and he had other, more pressing issues to deal with at that moment.  In any event, Nick had managed to wrestle his hormones back under some semblance of control by the time Isobeille emerged from his bedroom.

“Does this please ye better?” she asked doubtfully.

He brought his hand up to his mouth to try to hide the smile he could not completely contain.  Tiny feet peeked out from beneath his baggy sweats, rolled up several times at the ankle.  His old jersey hung to her knees, but sufficiently covered all of those tempting curves from view.

“Infinitely,” he said, breathing a sigh of relief.  “Now let’s take a look at that hand, then we can eat.”

Nick was acutely aware of Isobeille’s gaze as he examined her hand.  As a paramedic, he was used to all sorts of reactions from the patients he treated.  Some were grateful, some were scared, some were just plain nasty.  Occasionally he would feel the heat of a woman’s stare (or less commonly, a man’s) as he tended to their injuries.  But none of them seemed to affect him quite as strongly as Isobeille’s.  It felt warm, like the sun on his skin, and sank down deep into his bones (and various other body parts).

Outwardly, he remained coolly professional.  But inside his chest, his heart pounded out a thunderous tattoo.  A viscous warmth spread from where he held her hand in his, travelled up his arm and into his chest, settling somewhere around his midsection.  This time, he didn’t bother checking the thermostat.

And it wasn’t just her tangible gaze or the blossoming warmth from holding her hand that was messing with his senses – it was her scent, too.  With each breath he took, he drew in the scent of fresh snow and wildflowers.  He had to wonder where the hell that came from, because he couldn’t think of a single product in his bathroom that smelled like that.  Maybe Gloria had left something.

“Ye have a gentle touch for such a strong mon,” she said softly, bringing his ears into the sensory party.  The only thing left was taste, and he was so not going there.  “Are ye a healer?”

A healer?  “Sort of, I guess.  I’m a paramedic.”  When she didn’t seem to know what that was (and why was he not surprised?) he explained simply, “When there’s an accident or someone is hurt, my job is to assess their injuries and treat them until we can get them to a hospital.”

She smiled at him as if he had just told her he’d hung the stars in the sky.  “Ye help people.”

Nick felt his cheeks burning.  Jesus, was he blushing?  “It’s no big deal.”

He decided to drop it, focusing on coating a few of the deeper scratches with some antibiotic cream and applying some band-aids.  She seemed legitimately impressed with him, yes, and that made him feel pretty good, at least until he remembered that she’d been pretty damn impressed with a light switch and a flushing toilet, too.