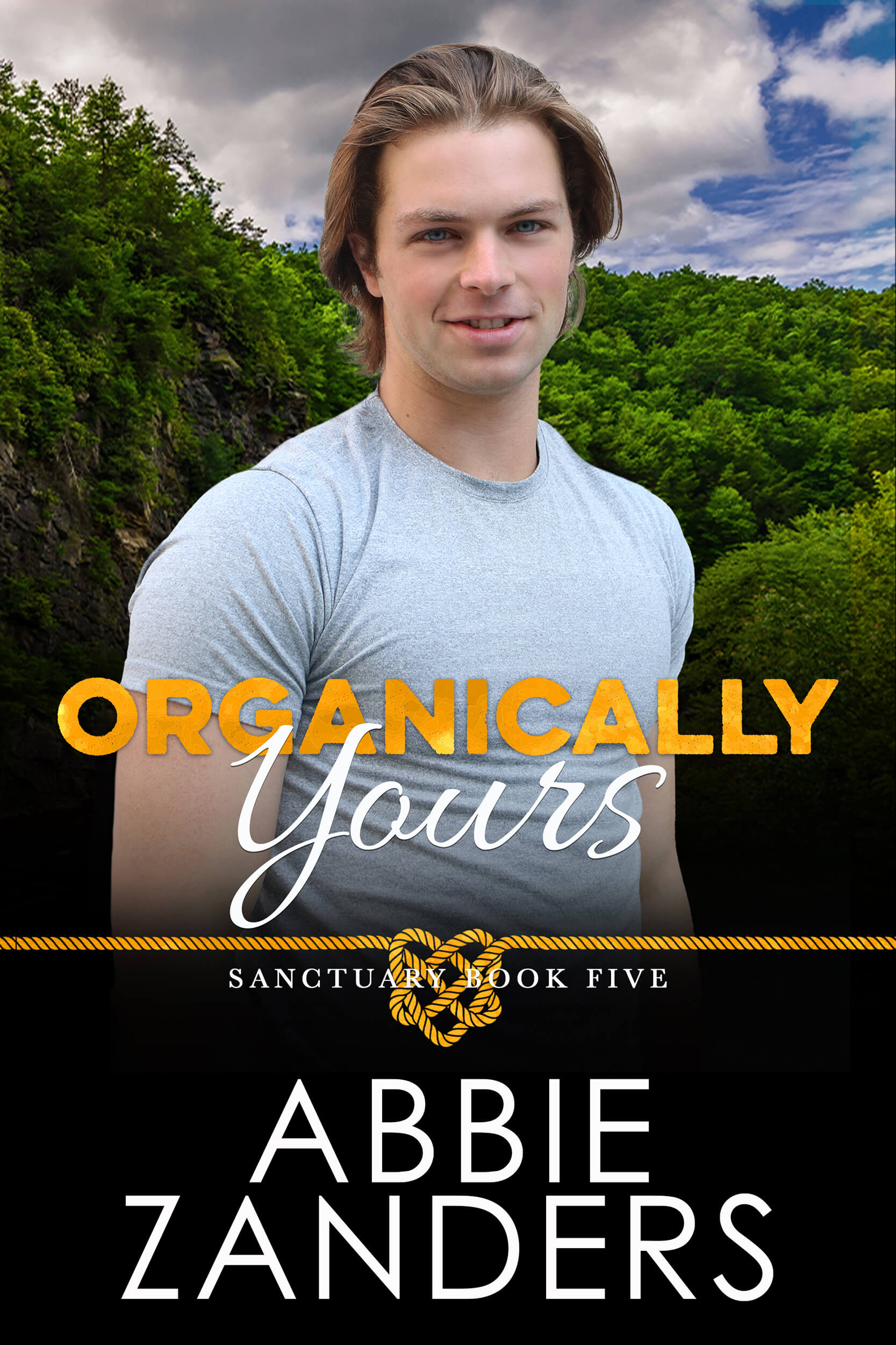 Have they found the secret recipe for happiness…or are they playing with fire?

No one knows more about peaches than master orchardist Tina Obermacher. The only thing she lacks is time to cultivate a personal life.

When the ladies of Sanctuary invite her for regular coffee and conversation, Tina jumps at the chance for some much-needed girl time—and the opportunity to cross paths with the hunk of laid-back hotness they call “Doc.”

Cole Watson has found a comfortable niche in the northern PA mountains, helping fellow former servicemen and women transition back to civilian life. He’s not looking for a relationship, at least not until he meets Tina. Her womanly curves and intelligent eyes give the former SEAL a new mission: make her his.

It’s complicated, though. Not only do Tina’s brothers vehemently oppose Sanctuary, they’re into something far shadier than the family orchards, and Doc can’t warn Tina without jeopardizing years of undercover work.

The best he can do is be there to catch her when everything crumbles. The question is, once she learns the truth, will she let him?

Organically Yours is a contemporary love story with plenty of steam, small town suspense, and humor to give you all the feels and leave you smiling.

(NOTE: This WIP excerpt is  unedited, so there may be oopses. Exact content is subject to change in the final version, but I wanted to give you a little taste…)

Tina left Ziegler’s farmer’s market feeling tired and hungry. It was hard enough standing on her feet all day, but pasting on a smile and dealing with people was exhausting. The townies weren’t so bad. She knew most of them by name, knew their families, and a quick and friendly hello was always welcome.

But the tourists? The ones who came from out of town and thought venturing to the farmer’s market on the weekends was a rustic adventure? Not so much.

On the plus side, they were willing to pay premium prices for organic produce.

The best and worst thing about working the market was having to smell the slow-roasted, rotisserie chicken from the Amish place a few stalls down. Mouth-watering and delicious, it was hands-down the best chicken around.

Tina wasn’t the only one who thought so. Zook’s sold out every week, without fail. The locals knew to get their orders in early, before the place opened its doors to the public.

Those enticing aromas were now filling the cab of her truck, whispering suggestively that she didn’t have to wait until she got home to have a taste. Her stomach growled loudly in hearty agreement. Why should she wait? It was hot and fresh now, and when she got home, she’d feel compelled to unload the truck before settling in for the night. It could be an hour or more before she had a chance to sit down and enjoy it.

That was how Tina found herself sitting in the back corner of the parking lot, ripping into the foil wrapped goodness of a Zook’s chicken like she hadn’t eaten in days.

The first bite was practically orgasmic. The skin was crispy and dripping with hand-churned butter. The meat, melt in her mouth tender and perfectly seasoned. Tina closed her eyes and savored the moment, then took another bite. And another.

She was tearing the last piece of meat from the bone when there was a knock at the window. She turned, ready to rip her brother a new one for ghosting her, and promptly froze. It wasn’t her brother standing there.

No, it was so much worse. Dirty-blond hair, brushed back from a sculpted face, just long enough to skim the collar of his plaid flannel. Amazing hazel eyes so focused she felt his gaze on the inside.

At least, that’s what Kate Handelmann had called him. Tina didn’t know his real name. All the Sanctuary guys had nicknames. Even her old classmate Matt Winston had one: Church.

But none of them made her heart beat faster on sight like he did.

And none of them were currently standing outside her truck looking on as she tore into a chicken like a savage.

She scanned the interior of the cab for a paper napkin, a tissue—anything she could use to mop up the butter dripping down her chin—and came up empty.

Summoning as much dignity as she was able, Tina moved the bag to the passenger seat, wiped her greasy lips with the back of her sleeve as discreetly as possible, and put the window down.

His voice was just as buttery as the chicken. Smooth. Calming. But it wasn’t enough to erase her embarrassment, and her knee-jerk response was to go on the defensive. Growing up with three older brothers probably had something to do with that.

“You’ve been sitting here for a while.”

He shifted his weight. “So, I just wanted to make sure everything was all right.”

He started to turn when she said, “What are you doing skulking around the parking lot anyway? Ziegler’s closed an hour ago.”

He smiled, and damn if it didn’t make him even more gorgeous. “Helping a friend.”

Tina immediately wondered who that friend was, followed shortly afterward by a wave of envy. She imagined those broad shoulders lifting crates into the back of her truck. Not only would she have enjoyed the view, she would have appreciated a second pair of strong hands since her brother hadn’t bothered to show.

The good Samaritan walked away then. She groaned and banged her forehead on the steering wheel. Nice going, Tina. Way to make a great first impression.

She lifted her head and followed his progress in the sideview mirror, curious to see where he was going, but another knock, this one on her passenger window, garnered her attention and made her jump.

“What did he want?” her brother asked, tilting his head back toward where Doc had disappeared into the shadows.

“He just wanted to see if I needed help.”

“What’s that supposed to mean?”

“You stay away from them Sanctuary boys, Bert.”

Tina—or Bertina, as her misguided parents had named her—bristled. She hated being called Bert, which was exactly why her brothers did so at every opportunity.

“I’ll do as I damn well please. And you, mind your own business.”

“So am I. Where the hell have you been, anyway? You were supposed to be here hours ago.”

His jaw clenched. “Something came up.”

“I bet,” she said, throwing his own words back at him, but she did sarcasm a whole lot better than he did. “Like what?”

He clamped his lips shut, and she knew she wouldn’t get an answer tonight, but things were coming up more and more frequently these days. Rick was up to something, and she had a feeling that whatever it was, she wouldn’t like it.

She’d find out eventually. Keeping a secret in Sumneyville was like trying to hold water in your hands. Eventually, it would start trickling out.

She changed the topic. “Climb in. I’ll give you a ride back and you can help me unload.”

“Can’t. I’m supposed to meet up with the guys at O’Malleys.”

“They can wait. Unless, of course, you want me to call Bonnie and ask if she knows why you didn’t show today.”

Bonnie was Rick’s wife and the mother of their two kids. They’d only been married a decade, but they’d already slipped into the phase where they could barely stand to be together in the same room. Tina knew the last thing Rick wanted was another reason for Bonnie to bitch at him.

He scowled but got in, picking up the bag so he could sit. “Zook’s?”

“Any left?” he asked hopefully.

“Nope.” There was no way she was telling him about the second chicken she’d picked up for later in the week. “Maybe if you’d have shown up like you were supposed to, you could have gotten one.”