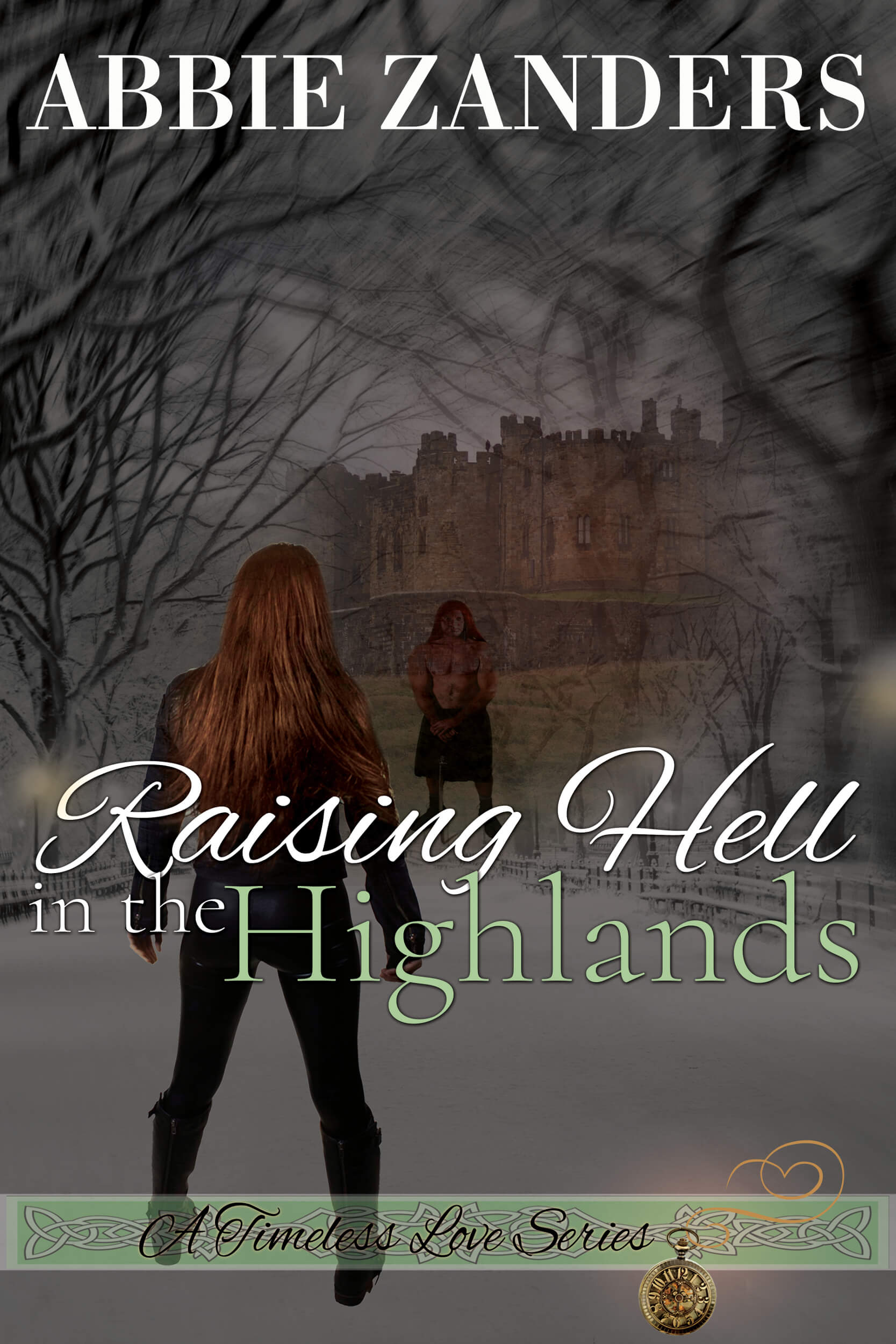 Raising Hell in the Highlands

Sometimes you have to go back before you can move forward…

Aislinn Isobeille McKenna is feeling lost and alone. Recently discharged from serving six consecutive 12-month terms with the US Army, she has no home, no family, and no friends, which is nothing new for her, really. She lives a transitory, vigilante-type lifestyle in shadows, kicking ass and taking names.

At least until she’s attacked from behind and wakes up to find herself in the Scottish highlands six centuries earlier, right in the midst of a clan skirmish.

After saving the life of Laird Lachlan Brodie, he takes her back to his keep to tend to her injuries and get some answers. She’s sure it’s all a dream, especially when things get hot and heavy and very realistic with the sexy Scot, but in what kind of dream does she still have to shave?

“I really enjoyed this book. It was a quick read, soulful, and funny. My heart broke, healed, and soared. Lovely for a quick trip or rainy afternoon.” ~ Amazon Reviewer M.

Aislinn slowly returned to consciousness.  Her eyes were heavy, her limbs like lead.  For all intents and purposes, it felt like she was suffering the aftereffects of one hell of a bender, though she was not one to overindulge.  As a rule, Aislinn liked to remain in complete control of her faculties, and would never willingly have made herself that vulnerable, especially not without her team to watch her six.

The errant thought slipped through the walls she’d erected around her heart and scored a direct hit before she could stop it.

You don’t have a team anymore.

So what the hell had happened this time?  She tried to think back.  She remembered leaving the church, walking up and down the streets, her feet taking her where she needed to be.  Usually it was the bus station, or a train station, or the occasional dock – someplace where the criminal element thrived.   Somewhere where it wasn’t difficult to find someone who could benefit from her taxpayer-funded skills training and life experiences.

But she hadn’t been drawn to any of the usual haunts.  After wandering aimlessly for a while, she had cleared her mind and found herself moving toward the park.  She must have circled the outer path twice before coming upon the pile of shivering rags huddled between the bench and the trees.

It wasn’t the first time, and the odds were that it wouldn’t be the last.  There were too many like that.  Too many homeless, too many addicts, too many who had no place to go and no one they could turn to for help.

Aislinn lifted her hand and gingerly touched the base of her skull, wincing when it shot a fresh wave of pain right through to her frontal lobe.  Her fingers came away sticky and dark, which meant the wound was probably still bleeding a little, but it didn’t seem to be life-threatening at least.  She’d had a lot worse.

She’d definitely had her bell rung, though, as evidenced by her current level of disorientation.  Aislinn endeavored to push the pain and haze into the background and focus.  Distraction was a good way to get herself killed.  Or worse.

She could feel the grass beneath her and see the fuzzy outline of trees through her blurred vision, but it felt different somehow.  It was no longer dark, she realized; maybe that’s what was throwing her off.  Exactly how long had she been out?

Her hands automatically went toward her weapons as she patted around her body.  All present and accounted for, she thought, sighing with relief.  Even her pack was still loosely slung over one shoulder.

She pushed herself up to sitting, closing her eyes while the world spun wildly around her and fucked with her senses.

It wasn’t just the daylight that seemed incongruous.  Aislinn didn’t feel the biting cold as she should, either.  Snow had already begun to fall in earnest during her last foray along the path, promising a white Christmas for the first time in years.  But rather than finding herself face down on frozen ground, she was laying on what appeared to be soft – albeit uncut – grass.  And it was warm.

The scents were all wrong, too.  Snow had its own smell – anyone who spent any time up North knew that.  But there was no hint of it now.  Nor was there any discernable whiff of trash, dead leaves, or the ever-present aromas of stale beer and urine usually so prevalent in the park.  She expanded her lungs, pleased when they didn’t protest too much, and drew in the scents of grass, clean air, and oddly enough, something that smelled like dried herbs.  Lavender, maybe, or heather.

Her senses were returning to her slowly but surely.  As her hearing came back online and the annoying buzz faded, her brain struggled to identify the sounds.  One was easy enough – men.  Loud, bellowing men, grunting and spewing forth colorful vulgarities in a thick brogue.

And … horses?  Not that she was particularly familiar with the beasts, but even she could recognize a few snorts and whinnies.

There was something else, too – a repeated, rhythmic clanging that resounded in her skull painfully and immediately roused her self-preservation instinct.

She rubbed at her eyes until the last of the little black dots faded away.  And then shut them again quickly in disbelief.  Clearly the blow to her head had caused significant damage, because there was no way what she had seen could be real.  She decided she must be suffering from some kind of displaced psychosis resulting from a head injury and repeated viewings of The Highlander during late night bouts of insomnia.

She pinched herself – hard – then opened her eyes again, but the surreal scene hadn’t faded.  She tried again and caught her breath.  Yep.  Still there.

The more she watched – she had quite a vivid subconscious imagination, it seemed – the more entranced she became.  Especially by the super-sized guy sporting the black and green plaid.  A warrior, for sure, with his long, flowing auburn hair braided at the temples and a symphony of rippling muscles.  With the face of an archangel – hard and masculine yet otherworldly beautiful, sinfully defined arms and legs, he moved with lethal grace and skill.

Despite his size and obvious proficiency in combat, he seemed to be a bit overwhelmed at that moment.  Aislinn counted no less than six men attacking the warrior all at once.  They, too, were large men sporting kilts, but they didn’t have the same skill with a sword – and holy shit, was that an axe? – as the really big one, and the colors of their plaids were different.

The big guy was holding his own, she noted with no little amount of respect.  But then a movement in her peripheral vision caught her attention.  As Aislinn watched in growing horror, three more men emerged from the trees behind the warrior.  With all of his focus on those in front of him and along his sides, he didn’t see the threat as she did.

It’s just a dream, she told herself, most likely the result of blunt-force head trauma.  But before she could fully process that thought, she was on her feet, shoving her personal discomfort aside and stealthily moving toward the action as her training kicked in.  It might be just a dream, but it was her dream, and she’d be damned if she’d allow such a fine warrior to go down by a sword to the back in any dream of hers.

Aislinn launched herself into the fray, pulling her blades from her boots as she did so.  In a series of lightning fast kicks and spins, she took out the three men attacking her warrior from behind before they even knew what hit them.  As the Mel Gibson look-alike turned around to see the commotion, she caught the flash of a sword sailing through the air – right at her warrior’s head.