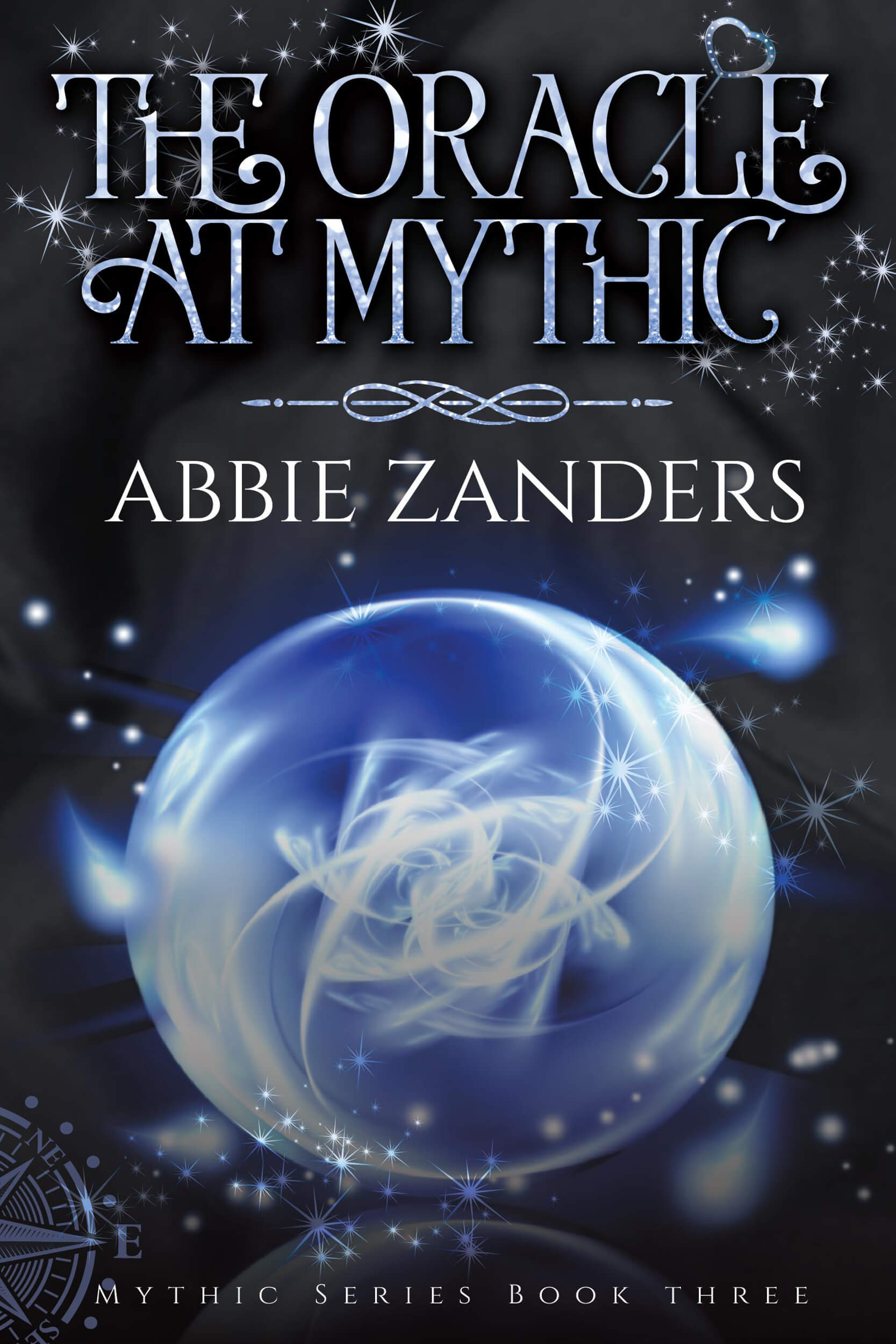 The Oracle at Mythic

Doctoral candidate Tedi Papadopoulos might appear absent-minded, but that’s only because she’s got so much going on in there. She believes the seemingly unrelated series of events that brought her to Mythic have a purpose, even if she can’t yet see what that is.

It might have something to do with the tall, dark, and sexy guy who tends to appear at the most opportune times. And she’d be totally okay with that, because he has a way of focusing her thoughts. When he’s around, she can’t think of anything else.

Despite his best efforts, Kristoff can’t get Mythic’s newest arrival out of his mind. Sure, she’s adorably addled and sexy, but she’s unknowingly putting a crimp in his playboy lifestyle and he’s not happy about it. The fact that she’s garnered the attention of every shifter, mage, and vamp – including his own grandsire – isn’t helping.

There’s no doubt Tedi has a sense of Destiny about her. He’s just not convinced it’s his.

“I am the first to admit I am not a huge fan of paranormal books but Abbie Zanders’ Mythic is just fun. I LOVE the characters, the vampires, wolves, witches and others that live in this mystical city are just plain intriguing.” – Amazon Reviewer M.J.

Another brilliant bolt of lightning split the night, startling her into a vertical takeoff several inches above the couch-turned-bed. The earsplitting crack of thunder and shuddering vibrations that followed almost immediately suggested that either a) the earth was wrenching apart at some undiscovered fault line directly beneath her, or b) the strike had been really close. Neurons fired in her brain at the speed of light, calculating the probabilities of each possible scenario simultaneously with quad-chip accuracy.

Numbers didn’t lie. And if they weren’t convincing enough, the prolonged sharp cracks and whooshes audible over the howling winds were. Tucking away her mental calculator, her mind translated the sounds into an internal video clip of a large tree falling in slow motion.

As the branches scraped ominously along the outside walls of the cabin, Tedi did what any mature thirty year old woman would do: she slipped her treasured laptop under the sleeper sofa in a protective gesture, curled herself into a ball, and pulled the worn, faded blanket over her head.

With the sounds of the storm only slightly muffled, her genius level brain ran through a myriad of possible outcomes, thankfully very few of which were likely to end in death or serious injury. Lightning rarely struck in the same place twice, after all, and as scary as that last strike had been, she remained unscathed.

Before she could draw comfort from that fact, however, another ground-shaking strike and clap resounded. It was almost immediately succeeded by horrible, metallic crunching sounds, resulting in a second series of mental images involving another big tree and her tiny car. Pulling the blanket tighter around her, she trembled and assured herself that it was just a car, and not even one she liked, really. Better the aging Honda than her.

And really, what could she do? It wasn’t like she had a lot of viable options. Leaving the relative safety of the cabin greatly increased the likelihood of grievous bodily harm or worse. Small as it was, the stone and wood structure was a sturdily built thing, crafted with the skilled workmanship of an earlier time. A quick mental playback of the surrounding area confirmed that it offered the best shelter in the immediate vicinity. Surely it had weathered many such storms over the years.

Her thoughts continued at a rapid fire pace, searching for knowledge directly related to survival during a natural disaster. Should she situate herself in a doorframe? Centering herself between the supportive beams would offer the greatest chance of survival should the cabin begin collapse.

No, wait. That was earthquakes, and she’d already established that this was most likely not an earthquake.

Maybe she was supposed to wrap her arms around the toilet and hang on for dear life? The plumbing was anchored somewhere beneath the ground, and was the best defense against a sucking vortex…

No, that was tornadoes. This was a bad storm, but not a tornado. At least she didn’t think it was. From what she remembered from her Introduction to Meteorological Studies course (and the classic Helen Hunt film “Twister”), most tornados occurred in the Midwest and needed long stretches of flat land to build up steam. Oh, and trailer parks. For some reason, post-destruction news coverage always included trailer parks. And drive-in movie theatres.

Good thing she was in the mountains, then, surrounded by acres and acres of pristine forest with nary a trailer park or drive-in in sight.

Convinced that the sofa bed was her best option under the circumstances, there she remained, huddled and trembling and processing, until she heard an unfamiliar, rhythmic tattoo. At first she thought it was her heart pounding against the interior walls of her chest, but this noise came from outside her makeshift blanket shelter and was far less erratic.

Curiosity piqued, she lifted her head and let the covering slip down to her shoulders, listening intently. Rain hit the roof and sides of the cabin in heavy sheets. Thunder rolled and rumbled constantly, sounding like a great big semi was circling in laps just outside. And something else… There! From the left! The same pattern repeated: three raps, a brief pause, then three more.

With verses of Edgar Allen Poe’s famous poem The Raven looping in the recesses of her mind, Tedi’s natural inquisitiveness overcame her fear. She eased from the safety of her nest and felt her way through the pitch blackness to where the sound originated. Any noise she might have made was cancelled out by the storm raging outside, but she tiptoed anyway, her fingers held out before her warily to feel for the wall she knew was there somewhere.

Close now, Tedi leaned forward until her ear pressed against the solid surface, waiting to hear it again. When it came, the slab of oak beneath her cheek rattled beneath the force of it and she screamed.

A heartbeat later, the door was thrown open, knocking her off her feet. Tedi looked up into the doorway just as another bolt of lightning illuminated the outline of a large, dark figure. The brilliant background flash left the creature’s features shrouded in mystery, but whatever it was, it was big.

Man-shaped, its shoulders nearly spanned the width of the doorway and its head nearly reached the top. In the span of a heartbeat, an onomasticon of mythological creatures paraded through her mind – Sasquatch, Mogollon Monster, Golem, Argopelter, SlenderMan – automatically filtering out those indigenous to other parts of the world or not of the proper size and shape.

Wind and horizontal rain rushed through the doorway and she felt, more than saw, the figure step forward. Ignominiously sprawled on the floor, she attempted to scream again but found her lungs and throat paralyzed and wholly uncooperative.

The door slammed closed, muffling the tempest outside. Panic released her from immobility, allowing her to push to her feet, her head swiveling back and forth frantically in the Stygian darkness. Had who, or what, it was come inside?

Without warning, strong hands gripped her shoulders and a deep, smooth voice penetrated the haze of terror.

“Are you all right?”

Just that quickly, her fear ebbed and a sense of calm washed over her. Tedi reached up with curious hands, searching in the darkness. The pads of her fingers found the creature, solid and real. They traced wet, smooth skin. Moved along beautifully sculpted cheekbones and a strong jaw. Paused at the feel of full, soft lips that parted slightly beneath them. One finger slipped inside and discovered something long and smooth and sharp. Tedi pressed her finger to it, murmuring a soft exclamation when her skin was unexpectedly pierced.

She tried to pull her hand back, but a strong hand gripped her wrist and kept it where it was. Lips closed around her finger and she felt a gentle tug, one that sent nearly orgasmic spasms through her very core. For several long moments, all thoughts fled, her mind becoming blessedly blank. Her eyes drifted shut and her head lolled back while she simply enjoyed the wondrous sensations rippling through her body.

Possibilities floated along simultaneously on the current of pleasure, vague and distant. Maybe she had fallen asleep, and she was dreaming? Perhaps the wind had blown open her door, knocking her back, causing her to hit her head and lose consciousness? Or maybe she should have checked the expiration date on that dust-covered can of peaches she’d found before placating her growling belly hours earlier.

Before she could fully analyze the likelihoods of each, those delicious ripples of pleasure ceased. After a moment or two of weightlessness, Tedi somehow found herself on the couch again. Alone. She shook loose the sensual fog that seemed to have descended upon her and called out warily.

From the far side of the room, a soft hiss was followed by the lighting of a single candle, then another.

“You!” Tedi said when the familiar dark hair and black eyes came into soft focus. She recognized him as the Good Samaritan who had come to her aid along the remote stretch of road only a few nights before. Kristoff. The name popped into her mind, sending her heart into flutters even as her body and mind relaxed. It was exactly the same reaction as she’d had then, too. Besides being the poster boy for tall, dark, and handsome, the man had an impeccable sense of timing and some serious skills with a jack.

“Me,” he said in that smooth chocolate voice, the one that had been haunting her dreams for the past few nights. How the man could make one simple word sound like a choir of angels singing was beyond her. She filed that away for later analysis. Much later. She didn’t want to waste a single moment of time thinking about other things when he was right here.

In this very small cabin.

With her and a rumpled bed that suddenly seemed to take up the majority of available space.

Just the two of them.

Heat rose and pooled in intimate, personal places. “What are you doing here?” she blurted out rather breathlessly.

His eyes glittered like black diamonds in the flickering candlelight. “I came to see how you were faring in the storm.”

As if on cue, the storm surged, rattling the shutters with another powerful gust of wind. Tedi barely noticed. She was too fixated on her unexpected guest to worry about what was happening outside. His longish hair was wet and plastered in a silken frame around all those lovely angles. Crystal droplets captured the candlelight like perfect little prisms, mesmerizing in their beauty. Was it possible to be envious of a raindrop?