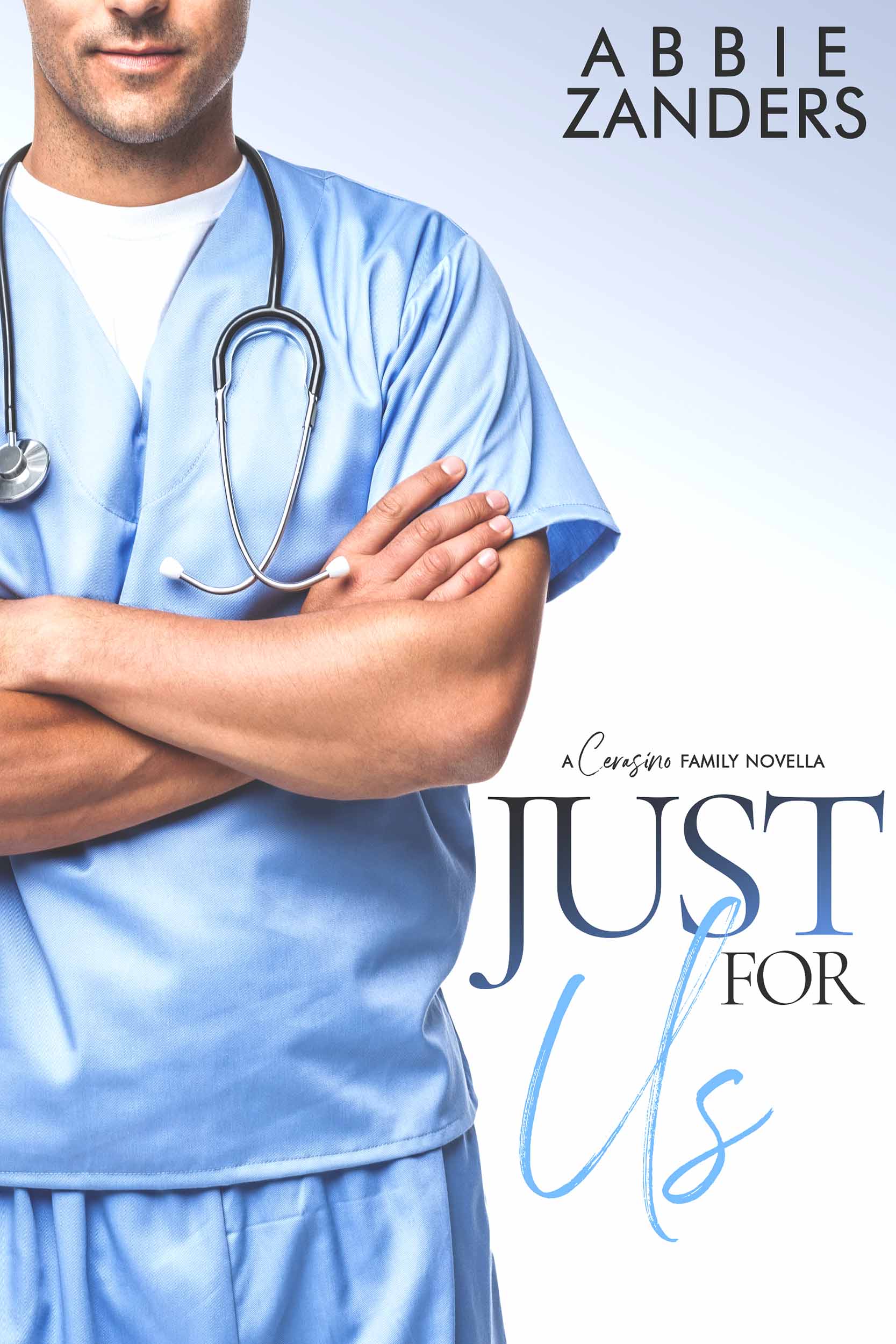 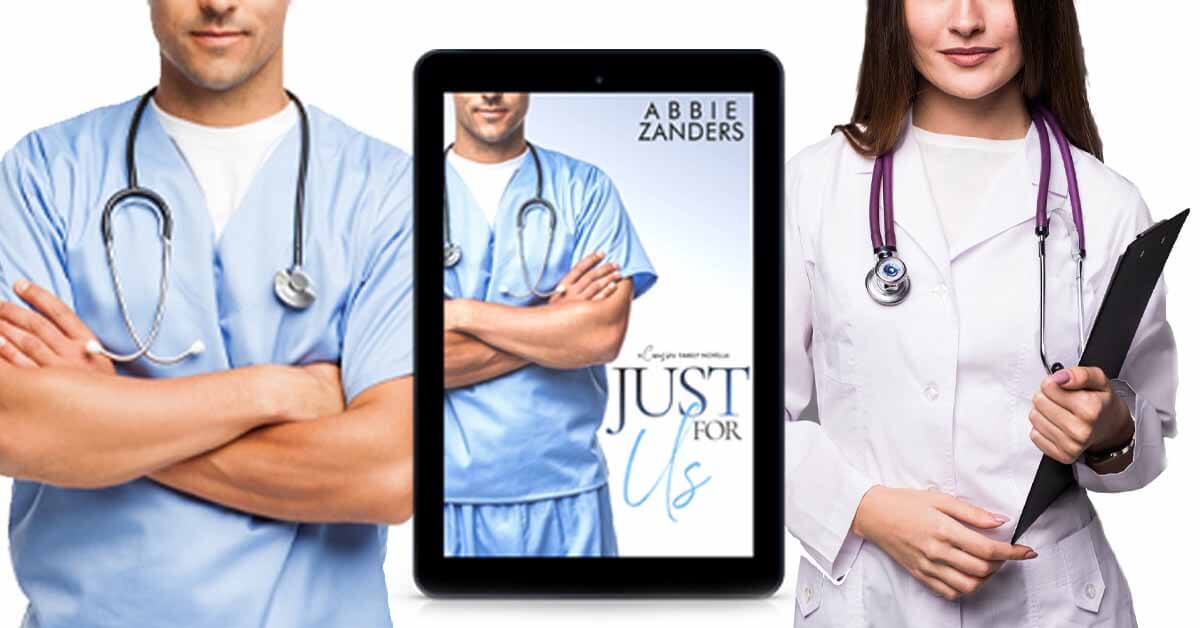 It only takes a second to change everything…

I’ve wanted to be a doctor for as long as I can remember. Now I’m so close I can taste it. The long hours, the lack of social life, the sacrifice—I know it’ll all be worth it. And not even the sexy new orthopedist on staff with the amazing smile is going to take my eyes off the prize, no matter how tempted I am.

But the accident that lands me on his operating table? That’s a game changer.

I didn’t know what to expect when I accepted the partnership offer, only that I needed a fresh start and Cecilton seemed as good a place as any.

I got it. New job, new place, and, after crossing paths with the feisty ER resident, the potential for something so much more. I think she feels it too, but she’s determined to keep me arms’ length—until my surgical skill might be the only thing that saves her.

Just for Us is a short, sweet, mildly suspenseful novella featuring a career-focused heroine with and a cocky but extremely skilled surgeon who’s as interested in caring for her heart as he is her injuries.

I’d stayed late, wanting to bring myself up to speed. As the new guy in an established practice, I felt compelled to prove myself.

Besides, I had nothing else to do. Thanks to a series of miscommunications, my new condo had neither cable nor internet. In fact, it didn’t have much of anything besides the barest of necessities.

With that in mind, I crossed the walkway bridge from the medical offices into the hospital and headed for the cafeteria. I’d grab a hot meal before I went back to my new place.

I was hungry enough that even steamed broccoli would’ve appealed to me—and I hate broccoli almost as much as I despise okra.

I shuddered, thinking of my first couple years of residency down South. Loved the people. Hated the food.

Thankfully, I saw neither broccoli nor okra among the offerings. The steak and shrimp stir fry looked phenomenal, so I ordered that. Another pleasant surprise—everything was made fresh. If the food tasted even half as good as it smelled, I’d be eating here a lot.

While I waited, I looked around. So far, I liked what I saw. Cecilton Memorial was nothing like the high-volume place from which I’d just transferred, which suited me just fine.

A group of firefighters and EMTs came in while I waited, drawing my attention. They appeared to be in high spirits as they headed over to the far end. A motherly looking woman beamed at them and started handing out cookies and coffee. My opinion of the place rose another notch.

“She smiled at me,” I overheard one of the guys saying.

“You’re delusional. She was smiling at me,” said another with a grin.

“You’re both delusional. Sofia’s out of both your leagues.”

“Besides, her brothers will kick your ass if you even try to tap that.”

Sofia. The name hit me just right. I don’t know why. It sounded at once classic and feminine. And, if the young male first responders were anything to go by, it belonged to an attractive, classy woman.

The man on the other side of the counter informed me my food was ready. I thanked him, took my tray to the register, then searched for an open seat along the wall, my stomach rumbling in anticipation.

The first bite confirmed the meal was every bit as good as it smelled. Better even than some I’d had in moderately expensive restaurants. I was definitely going to get as many meals here as possible, since my mad skills in the operating room did not extend to the kitchen.

The fork was halfway to my mouth for a second time when my pager went off, reminding me that I was on-call. I’d forgotten I even had it on me. I checked the display and saw the code for the ER, meaning it probably wasn’t something I should blow off.

I looked longingly at my plate and sighed.

I managed to shovel two more forkfuls into my mouth while I walked toward the exit. Yeah, it was that good.

Every chair in the ER was packed, mostly with senior citizens. Volunteers were moving about, trying to herd them away from the doors and the exam areas.

“What’s going on?” I asked one of the harried looking aids.

She glanced at my ID, her initial irritation softening somewhat. “Fire at the assisted living facility. No serious injuries, but they brought everyone here to get them checked out. Doc C’s got her hands full between fending off the dirty old men and the new batch of first years.” Her eyes narrowed. “You’re not a first year, are you?”

I was flattered she thought I looked young enough to be just out of med school. “No, but I am new here. I was called down for an ortho consult.”

“Through there,” she instructed, lifting her chin toward the double doors. “Welcome to Cecilton. Good luck!”

I moved toward the double doors, chuckling to myself when I heard her scolding two older gentlemen who were apparently setting up for a wheelchair race.

I moved to the triage desk within the restricted area. A seasoned RN pointed me toward a curtained area. The young woman who’d paged me was definitely one of the first years. New residents tended to have this look of triumph and abject fear about them, and with good reason. Residency was when things started to feel real.

I wondered if she was the Sofia I’d heard the firefighters talking about. She was pretty, if a bit on the anxious side, which made her run on at the mouth a bit. I tried to keep that in mind as I did the consult.

The resident introduced the patient as Mary White, an older woman, one with bright cornflower blue eyes and an assessing gaze.

I didn’t know what to say to that, so I said nothing. I concentrated on her knee, manipulating the joint as the first year looked on. Judging by the scars, Mary had had a total knee replacement not too long ago. “What happened?”

“Just locked up and then gave out on me while we were evacuating,” she said, wincing in pain.

“Often enough. Hasn’t been right since I had the replacement. Shoulda never had it done. I was in less pain before.”

“Have you talked to your doctor?”

She made a sound of displeasure. “He doesn’t listen. Says it’s arthritis and there’s nothing he can do, but I know my body, and I’m telling you, something’s not right.”

I withheld professional judgement. I didn’t know Dr. Foster, but I had enough experience to know that the patient point of view often differed from the physician’s.

“When was your last MRI?”

“About two years ago, I guess. Before the surgery.”

“Well, Mary, I think it’s time to order another.” I scribbled the order on the tablet and handed it to the resident. “Let’s figure out what’s going on in there, then we can talk about what we’re going to do about it.”

She beamed at me gratefully, then her eyes turned calculating. “Are you married, Dr. Mitchell?”

Warning bells went off in my head. She probably had a granddaughter she wanted me to meet. What was it with older women and their incessant need to play matchmaker?

I turned to the resident, not interested in pursuing the discussion further. “Let me know when these are done.”

I walked away, my eyes drawn to a woman in scrubs and a white lab coat talking to a first-year. I nearly stopped in my tracks. She was stunning. Long, curly, shiny black hair pulled back at the nape of her neck. Delicate features. Gorgeous dark eyes.

The resident talking to her went on his way, another taking his place almost immediately. Then another. It was several minutes before she was alone.

She turned my way and noticed me staring. I couldn’t help it. She was that pretty. “Can I help you?”

She looked bemused for a moment.

Sofia. I couldn’t help but return her smile. “Thanks. Is it always this crazy?”

“No, but you know how it is. Sometimes the planets align and the moon is full, someone sacrifices a goat, and it all comes together.”

I laughed. She was delightful, and suddenly, I understood why those firefighters had been acting like smitten boys. I was feeling rather smitten myself.

Her pager went off, and she looked down at the number. “Duty calls. Nice to meet you, Dr. Mitchell. I’m sure we’ll be seeing more of each other.”

With one more flash of that pretty smile, she was gone, and I decided there and then that I was going to like it here.